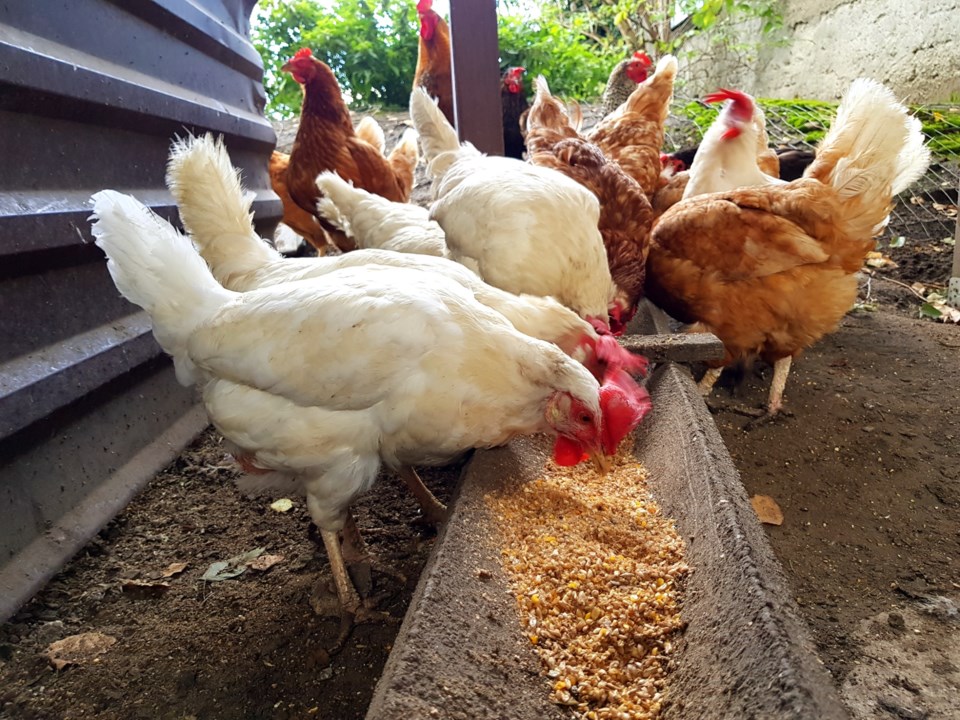 In Wednesday night’s virtual meeting of Innisfil Council, councillors shut the door to backyard hens, over concerns that chickens in residential areas could pose a disease risk for the town’s commercial chicken operations.

In May of 2020, the town received a petition from a resident, asking the municipality to lift its ban on backyard chickens in settlement areas. With growing interest in local food and sustainability, the resident suggested backyard hens could play a role both in education, and in the food supply.

Staff launched an online survey on the issue and received 782 responses, 56 percent from the Alcona area. Fully, 78 percent of respondents were in support of backyard chickens.

Two-thirds of those who participated in the survey felt that the town should allow four to six chickens to be raised on residential lots, with the number based on the size of the lot.

A review of 15 neighbouring municipalities found that seven out of 15 permitted backyard chickens – but only one-third allowed home-owners to keep chickens within settlement areas.

The staff report presented on Wednesday acknowledged concerns with disease, pests, smell and noise complaints, but recommended that the town undertake a three-year pilot program to test the feasibility of keeping chickens within settlement areas.

Under the proposal, up to 25 home-owners could register for the program, either free of charge or with a $25 one-time or annual fee (to be determined).

The program would permit the keeping of four to eight hens, for educational and personal egg production only, with the number of hens determined by the size of the lot. There would be no resale of eggs permitted, no slaughter, and no roosters.

The program would also set standards for fenced chicken runs and coops, with cleanliness and health standards defined in the Animal Control By-law.

Staff recommended moving forward to explore the pilot program, even though the Simcoe County Federation has opposed the keeping of backyard hens, “due to potential for disease and wildlife problems which would affect commercial operations.”

It was a concern also raised by Coun. Kevin Eisses.

Eisses said that he was originally in support of the idea of backyard hens.

“It seems fairly harmless. Everyone likes to see a chicken scratching around in the backyard, and you get a couple of eggs of out it,” he said – but after digging into the issue “a little more deeply,” he said he became concerned about biosecurity.

As a dairy farmer, Eisses said he follows strict health and safety protocols – but those protocols are not in place for hobbyists, raising concerns “especially when we are in a pandemic, and we know very well what a virus can do.”

The question of disease prevention, handling of chicken manure and deadstock, are all issues that need to be considered before permitting a pilot, he argued, suggesting that there “needs to be quite a bit stricter regulations, that would cost the town.”

Eisses, who acknowledged that he is related to a commercial egg farmer in Innisfil, urged council to maintain the status quo and the ban on backyard hens.

“I think we need some pretty stringent bylaws to ensure these birds are looked after and properly managed,” agreed Coun. Bill Van Berkel.

Coun. Alex Waters said that while he likes the idea of keeping farm animals in urban areas, as an educational opportunity, there is the question of liability for the town, in case of an outbreak of disease.

Council was told that in an outbreak, all of the affected birds would be euthanized, and the surrounding area within a radius of three to 10 km placed in quarantine. Among the diseases of concern are Avian flu, infectious laryngotracheitis and Marek’s Disease, which affect poultry.

So far in 2021, the Ontario Ministry of Agriculture and Food has issued four disease alerts for poultry in Ontario.

“It doesn’t just affect Innisfil. We see how viruses spread,” said Eisses. And although he noted that “our food system thankfully does a really good job at protecting us from that,” he worried about what might happen if inexperienced people began raising chickens.

Coun. Ken Fowler supported the pilot program, urging the town to limit the maximum number of participants to 25, and the number of hens to four per property – a potential total of only 100 birds.

“We’re not looking at opening the door” to permit chickens everywhere, Fowler said, suggesting that the pilot program and registration would give the town more control over backyard hens in urban areas.

“I know that this is a pilot, but… my biggest concern is the health concern,” said Coun. Donna Orsatti. She noted that backyard hens could also create noise, smells, and generate neighbour vs. neighbour complaints, at a time when By-law is already fully occupied with dealing with the pandemic.

“I think the timing is wrong,” said Orsatti.

Director of Growth Tim Cane noted that there seemed to be strong public support for backyard hens.

“Staff have been trying to balance that desire of the community… with the agricultural community,” Cane said, recommending that staff further investigate the options for a pilot, then come back with recommendations “before we actually go to the pilot.”

He pointed out that those residents currently raising chickens illegally within settlement areas could be brought into compliance, through the pilot.

Chief Building and Bylaw Official Barrie Vickers explained that the town had 24 complaints about backyard hens within the settlement area, last year, but noted that the chicken owners have not been charged due to the ongoing staff study.

“We cut them some slack” while the issue is under consideration by council, Vickers said.

Mayor Lynn Dollin proposed deferring a vote on backyard hens until the COVID-19 pandemic is over, to ease pressure on Bylaw enforcement, but Coun. Eisses spoke against deferral.

“We’d be having the same discussion,” he said, down the road.

In a vote, the majority of council opposed the recommendation that staff “be directed to undertake the development of a ‘ backyard hens in Settlement Areas Pilot Program’.”

The status quo remains in place.