Funds are re-allocated from the Cross Street Bridge replacement project
Oct 17, 2020 10:30 AM By: Miriam King 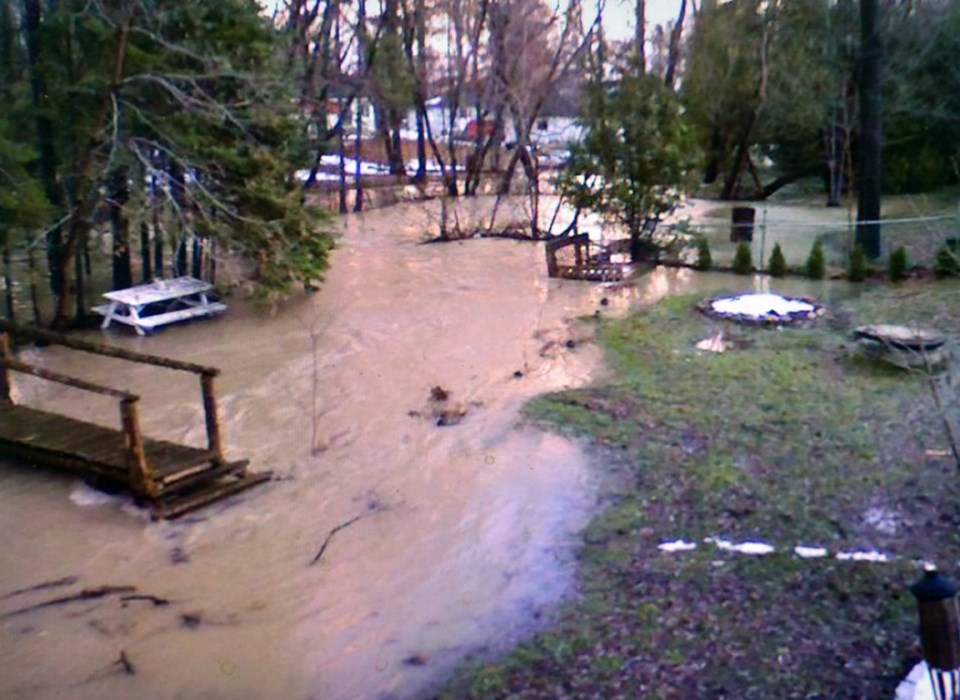 Homeowners Alistair and Kim Hunter-Gafur came to Innisfil Council on Oct. 14, to plead for relief from the flooding that has eroded their property, toppled trees and created “extremely dangerous” conditions in their own backyard.

The Hunter-Gafurs own properties at 1783 St. John’s Road and on Clifton Boulevard, and reported that since the town replaced the Banks Creek culvert underneath Line 7, annual flooding of their land has been “made worse… We’ve lost more than six feet of land” due to erosion, Alistair Hunter-Gafur said.

Speaking in Open Forum, he told councillors that during storms and spring melt, “the creek is raging and extremely dangerous,” making it hazardous to walk on their own property, causing erosion, and toppling trees onto their home.

He asked the town to shore up the creek banks, and help replace the culvert under their driveway – which, since the municipality put in the larger Line 7 culvert, is no longer able to handle the flows.

The issue of flood control in the area was on the Oct. 14 agenda later that evening. A report filed by Capital Engineer Leader Jessica Jenkins recommended reallocating funds, initially proposed for engineering a replacement of the Cross Street Bridge, towards flood mitigation and bank stabilization.

The Cross Street Bridge is the final bridge over Banks Creek, before it enters Lake Simcoe. Back in 2007, a Municipal Class Environmental Assessment (MCEA) proposed increasing the capacity of the bridge structure in an effort to mitigate flooding upstream – suggesting that it would prevent floodwaters from backing up and damaging homes in the area.

However, in 2017 a review of the MCEA determined that the Cross Street bridge was in relatively good shape, with at least 15 to 20 years remaining before it would need major repairs or replacement – and that widening the span would have a minimal impact on flooding in the area.

The consulting engineers reviewed the options, and instead suggested that the Town focus on monitoring flood levels in the creek, to better understand patterns of flooding, and work to restrict upstream flows by improving or adding stormwater retention facilities.

Council agreed with the recommendations – which meant that $550,000 of the $690,000 originally budgeted could be re-allocated to other projects.

Wednesday’s report recommended spending $66,000 on monitoring, and $484,000 on immediate bank stabilization projects – projects which have been simplified when the Crown transferred ownership, on Sept. 8, 2020, of Banks Creek from St. Johns Road to Cross Street, to the town.

The report noted that “the reassignment of project funds would go a long way to help those that are most impacted by the quantity of water that flows through the study area, by stabilizing the embankments to prevent further erosion from occurring.”

Council voted in favor of the recommendations.

“It is one of the areas that floods yearly,” noted Coun. Bill Van Berkel, acknowledging that the flooding has caused erosion. “There has to be some way to fix that.”

But the project may not help all residents impacted by flooding. In response to a query from council, Jenkins noted that the funds for bank stabilization would be directed toward the portion of Banks Creek that is now owned by the town, and not private property, although she promised to work with private landowners to find solutions.

The report recommended the re-evaluation of five existing upstream storm water management ponds for “functionality and retrofit capacity,” as part of a 2021 Storm Water Management Master Plan, which will be considered in the 2021-2022 budget.

However, any actual work on the ponds may be put on hold, due to the Mobility Orbit development. As the report noted, “It is anticipated that the Orbit development may have an impact on this stormwater drainage area, and as such staff are planning to review this through updated modelling as part of the Orbit Master Plan process” over the next 18 months.

Other long-term projects could include the identification of Banks Creek, from 20 Sideroad to the outlet at Cross Street, as a municipal drain. Not only would it give the town access to private property for maintenance, eliminating the need for easements, it would also allow the municipality to recoup maintenance costs from the “benefitting landowners” within the Banks Creek drain watershed, under the Drainage Act.

The municipal drain idea will also  be considered as part of the 2021 Storm Water Management Master Plan update.

Bank stabilization work is not expected to begin until later in 2021; engineering will be gathering information, and working with the LSRCA on the design and necessary permits.

Police seek information on Bradford commercial break and enters
Oct 20, 2020 4:30 PM
Comments
We welcome your feedback and encourage you to share your thoughts. We ask that you be respectful of others and their points of view, refrain from personal attacks and stay on topic. To learn about our commenting policies and how we moderate, please read our Community Guidelines.