There is a mouse in the house ... it's a tale of mice and men

The recent arrival of mice in the house has led to the creation of a trapline of defence of sorts, says outdoors columnist
Oct 26, 2020 7:45 AM By: David Hawke 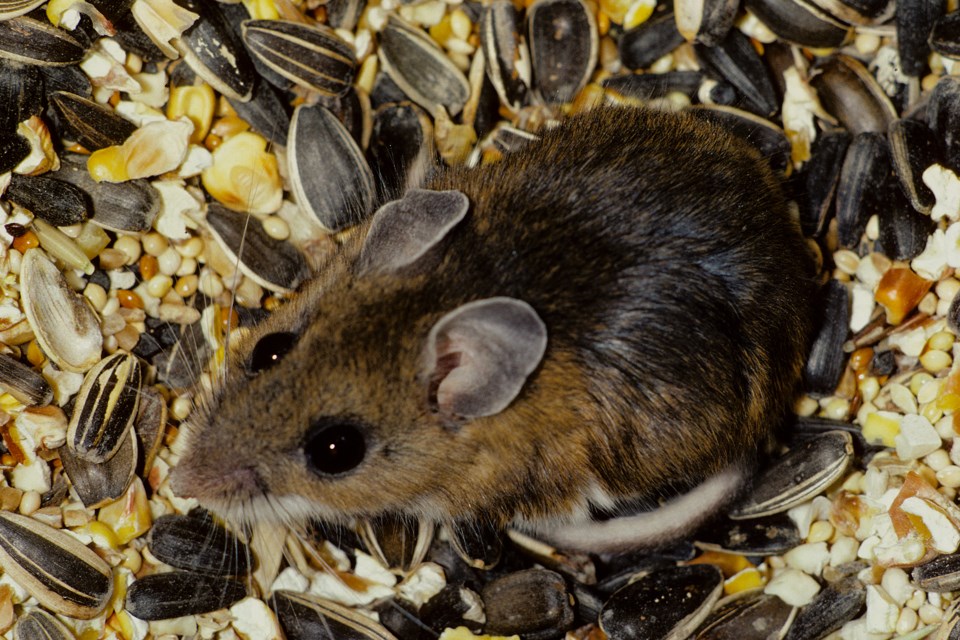 There's a mouse in the seed bin. But what type of mouse is it? That's a long story. David Hawke/OrilliaMatters

I open one eye and look at the bedside clock... 4:02 a.m. Good, got another one, same time as yesterday's capture. The recent arrival of mice in the house has caused me to set out a trapline of defence.

Our building is quite old and quite different from a 'normal' building in that it's a barn, built about 1890. Since 1969, mice, raccoons, squirrels and wasps have been having a hard time realizing that the tenants have changed from four-legged beasties to two-legged humans.

However, the message is slowly getting out there, what with new interior walls, insulation and weather-proofing.

But a barn is a barn, and the cracks left around the big support beams and the gaps between foundation stones are like open doors to shelter-seeking vermin.

Not that they consider themselves vermin, I'm sure, but we do... and that makes a difference. If they've been smart enough to find a way in, they had better also be smart enough to avoid mouse traps, if they want to survive 'til spring.

A year ago we cleaned up the workshop a bit and I remember moving the small cardboard box that contained all the wooden-based snap traps. There were several mouse-sized ones, a rat-sized one, and a couple broken ones (that are kept for sentimental reasons?).

I clearly recall looking at them. But now, I can't recall just exactly where I might have placed said box of traps.

With a barn full of mice and the trap box gone AWOL, it was becoming a harrowing experience.

A visit to the hardware store shows how much time and effort has been put on the old adage, "build a better mouse trap". Plastic may have replaced wood, but the old trip-lever style is still employed.

Mind you, I do like the new-fangled way of setting these traps, with just a squeeze of the wire frame (no more getting your fingers nipped when the catch doesn't quite do its function).

Sonic wave machines seemed a bit too high tech for what I wanted to do, and sticky boards are, well, just plain gruesome and cruel. So home I came with a handful of plastic traps, ready to thwart the home invaders.

These little critters seem to have a tightly timed routine as to when they are in certain areas of the house. If I wasn't such a light sleeper, I might never have known this trivia of nocturnal mousy meanderings (although those early years of having pet hamsters and gerbils should have given a clue, as I was getting up night after night to remove that darn squeaking exercise wheel!)

Like any hunter, or naturalist for that matter, I took advantage of having a new specimen in hand, looking at the challenge of making a good identification of the wee timorous beastie. Indeed, what species of beast have I captured?

Since it was inside the house, the list of suspects gets narrowed down to three pretty quick: deer mouse, white-footed mouse or house mouse. Mind you, there has been a shrew or two over the years, but these three are the usual suspects. The dog-eared Peterson Field Guide to Mammals is brought forth. Let the page flipping begin.

The deceased is certainly not a house mouse. If it were so, it would have a grey belly and naked tail... this one had a white belly, a somewhat furry tail, and seemed sleek and well-groomed. House mice are reported to have quite a musty odour about them, but admittedly I did not administer a sniff test.

So, even though it is a mouse and was caught in a house, the scientific community feels that other factors are to be considered when diagnosing an identification. I felt confident to move onto the next illustration.

But wait a minute... the illustration for the white-footed mouse also shows a bi-coloured tail. A closer read reveals that the tail of a deer mouse is longer than its body, unless it's a young one, which may or may not have a shorter tail, in which case it may be a white-footed mouse, or not.

Hmm. A quick search on the Internet comes back with an uber-detailed analysis of how it's impossible to determine a white-footed mouse from a deer mouse without a blood sample from each.

Looks like we mere mortals are not capable of telling one from the other. Fine. Maybe the cats can have some fun with the carcass come morning, despite not knowing its true identity.

I'm going back to bed... surely by now they've all been caught. Right?

Bridget's Run raises 'heartwarming' $36K for Barrie hospital
Dec 2, 2020 5:30 PM
Comments
We welcome your feedback and encourage you to share your thoughts. We ask that you be respectful of others and their points of view, refrain from personal attacks and stay on topic. To learn about our commenting policies and how we moderate, please read our Community Guidelines.