Plan includes repairs to the cenotaph, and replacement of some of the memorial trees
Oct 18, 2020 1:45 PM By: Miriam King 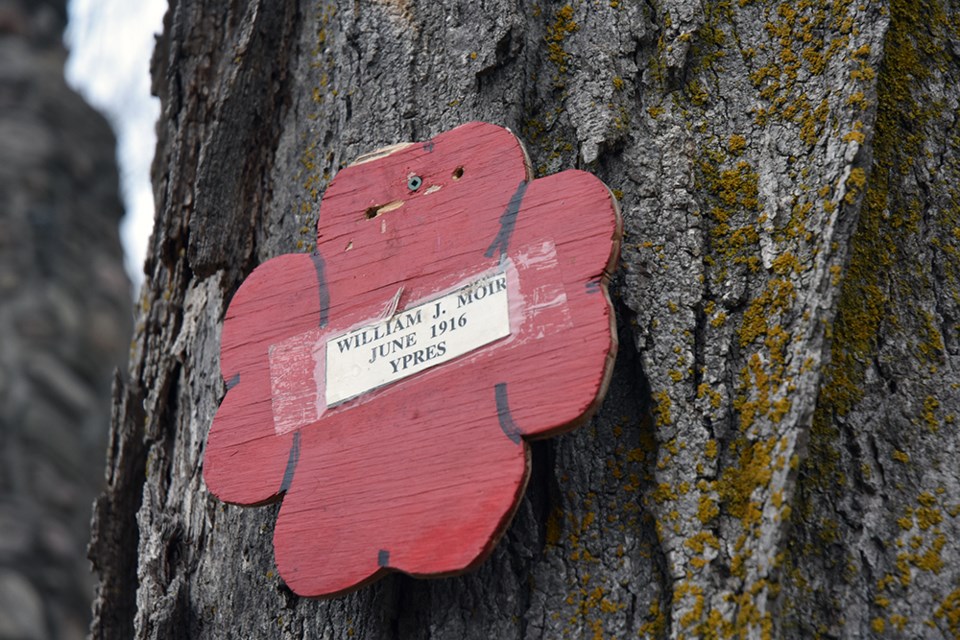 Each maple tree in Veterans' Park in Cookstown was planted in memory of a local soldier who fell in World War I; for Remembrance Day, each tree bears the name of a fallen soldier. Miriam King/Bradford Today

Cookstown’s Veterans’ Memorial Park is getting a face-lift, thanks to local Legions, Veterans Affairs Canada, residents and the Town of Innisfil.

The park, which includes a grove of 65 maple trees and a cenotaph designed and built by Alfred Davis of Lefroy, commemorates the Cookstown residents who served and fell in World Wars I and II.

The concept of the park was first proposed in 1917. The village planted 65 maples – one for each resident who answered the call to serve in the First World War.

The cenotaph was added in 1935, and over the years has been fitted with plaques commemorating Cookstown’s war dead, and those who served during the Korean conflict. In front of the memorial was placed a German World War I Minenwerfer (trench mortar), captured by the 102 Battalion on Aug. 8, 1918, at the Battle of Amiens.

Every year, the Veterans’ Memorial Park has been the scene of Remembrance Day ceremonies and memorial wreath-layings – but over the past 100 years, both the trees and the cenotaph have been showing signs of wear and tear.

The trench mortar, corroding and badly rusted, was removed for restoration work in the fall of 2019. Work is expected to be completed this fall, although the cement pad needs to be replaced before the gun is returned to its former position in front of the cenotaph.

The cenotaph itself is in need of repairs, with damage to the plaques, a crack in its base, and chipping of the mortar between the stones.

But it’s the state of the mature maple trees, and three Norway Spruce, that has raised the biggest concerns.

In 2019, a consulting arborist was hired to inspect and evaluate 60 trees. He recommended pruning, cabling, mulching and care for the majority of the trees, but also identified 14 trees that needed to be removed, because they could pose a risk to people or property – including one tree that has since collapsed.

This summer, the crown of the tree collapsed in high winds, causing damage to the adjacent cemetery fence and a gravestone.

The Town of Innisfil has now taken down seven of the trees – but, sensitive to the memorial function of each maple, plans to replant this month.

A report to Council outlined the history of the park, and the work plan now underway. Ten more trees will be taken down next year – including seven additional maples identified as posing a risk, and three Norway spruce that are in poor health. The memorial trees will all be replaced, either with Native Sugar Maples, or locally-grown Red Maples.

The remaining work, to be carried out in 2021, includes repairs to the cenotaph, cement pad and walkway, new benches, improvements to drainage, landscaping, and tree removal, pruning and planting.

The staff report provided an update on what is being called the “Cookstown Veterans Park Sustainability Plan.”

To date, the town has received $12,741 in funding towards the work.

The town has also received $1,500 in community donations, and $4,641 from the Veterans Affairs Commemorative Partnership Fund, and plans to apply for an additional grant from Veterans Affairs, for memorial repairs.

“It does need severe repair,” said Deputy Mayor Dan Davidson of the Cenotaph and memorial park.

“I concur,” agreed Coun. Kevin Eisses. “We are getting close to November 11. It is very significant, and we should do whatever we can.”

Mayor Lynn Dollin emphasized that the memorial nature of the trees in the park is being recognized, even though some of the trees and branches must be removed. She called it a “sensitive issue.”

“Each one of those trees represents a person,” the mayor said, noting that all memorial trees will be replaced.

The report was received for information.

COVID-19: How video games can add to kids’ learning during isolation
Oct 26, 2020 9:25 AM
Comments
We welcome your feedback and encourage you to share your thoughts. We ask that you be respectful of others and their points of view, refrain from personal attacks and stay on topic. To learn about our commenting policies and how we moderate, please read our Community Guidelines.