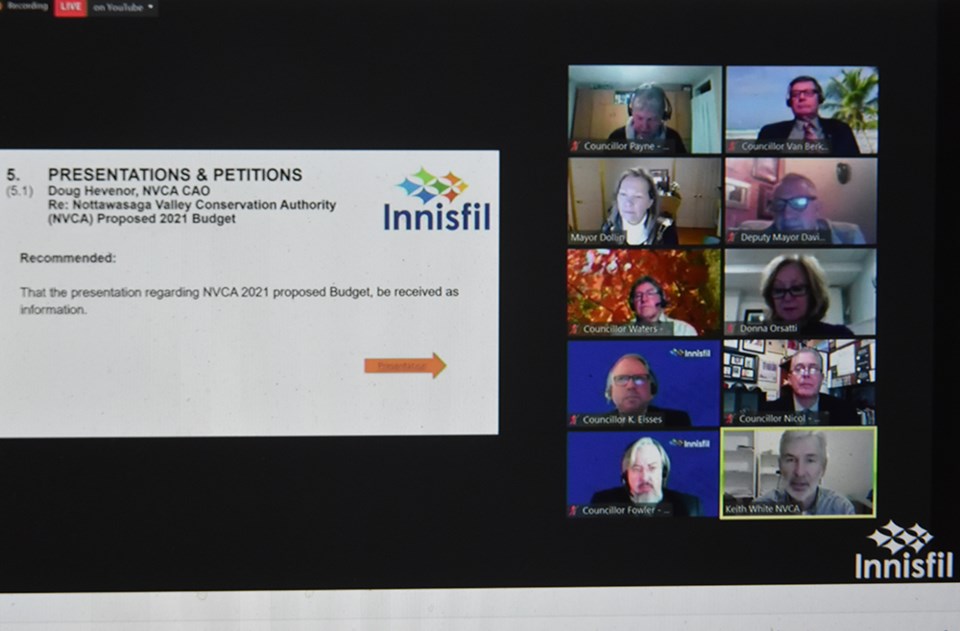 Chair of the NVCA Keith White addresses Innisfil Council in a virtual meeting over ZOOM. Screenshot

It’s not only the impact of COVID-19, not only the challenges of climate change and severe weather events - but new legislation put forward by the Provincial Government could restrict and redefine CA’s ability to protect the environment.

Both Walters, and NVCA’s Chief Administrative Officer Doug Hevenor appeared as delegations at the Nov. 25 meeting of Innisfil Council, to present their proposed budgets and levies for next year.

Hevenor noted that revenues for the NVCA have been greatly restricted during the pandemic.

Not only has provincial funding been frozen at just over $97,300, the Authority’s educational program which normally reaches approximately 50,000 school children “was devastated this year,” Hevenor said, due to COVID. “We laid off just about all of our staff.”

Wedding cancellations alone, at NVCA venues, cost the Conservation Authority about $85,000, and cancellation of the Tiffin Spring Tonic maple syrup festival was a blow not only to the Authority, but to the Barrie Rotary Club for which it raises funds.

Although educational programs are now being provided by satellite, and the model of staff working from home has actually led to more efficient processing of applications, the challenge of new legislation remains.

“Stewardship and restoration – this is the real life blood of the Conservation Authority,” Hevenor told councillors – from improving spawning grounds for Chinook salmon and Brook trout, to livestock exclusion from creeks, and projects that prevent streambank erosion and restore floodplains.

“These programs are vital,” he noted, yet in Bill 108 and now Bill 229 “they have not been identified as core activities,” to be funded by the annual levy.

There are real-life consequences, Hevenor told council, of stripping the Conservation Authorities of their ability to monitor conditions or comment on the proper location of infrastructure, like dams and housing.

“We have to work strongly together,” he said.

Although taxes, benefits and insurance costs have all increased, the NVCA has held its overall increase in the levy to only $38,000, for the whole watershed, noted Director of Corporate Services Sheryl Flannagan.

Walters noted that the LSRCA has held its increase to 1 percent for 2021 – “the smallest in 5 years. This is a status quo budget.”

Although the LSRCA has also seen revenues curtailed, it was able to pivot and within five days of the lockdown in March, had 100 percent of its staff working from home.

There have been no layoffs, Walters told Council, and although “we’re still not back at the office,” the Authority has been able to offer programming and services online.

The LSRCA has been able to update its emergency floodplain mapping, complete 84 projects, and will be introducing a new land disposition policy and strategy, that will allow it to divest itself of some properties, to “pay more attention to other lands that we own.”

And thanks to the fact that the LSRCA operates under the Lake Simcoe Protection Plan, it may be buffered from some of the harshest provincial regulatory changes – although a 10-year review of the Protection Plan is currently underway.

Walters noted that Bill 229 is likely to have unintended consequences, actually lengthening approval times if everything has to go to the Ministry. And if all “non-core” operations of the LSRCA are no longer funded, there will be a need for “multiple memoranda of understanding” with municipalities to get essential work done.

“It is an increase. We tried to keep it as small as we could,” said Walters, pointing out that the Conservation Authorities receive no assistance from the province for their COVID-related costs, like PPE and cleaning materials.

“This year coming, we’ll be all about implementation,” he said, noting that the LSRCA regulates approximately 57 percent of Innisfil’s area, including Lake Simcoe. “We’re looking for those opportunities where we can create more forests, create more wetlands, create more grasslands.”

Council received the budget presentations, and later in the meeting unanimously endorsed a letter from the NVCA and Township of Essa, calling on the Province to repeal Schedule 6 of Bill 229.

The letter asks the province to continue to work with conservation authorities “to find workable solutions to reduce red tape,” while respecting the current relationship between Conservation Authorities and their municipalities. It also calls on the province to provide the tools and financial resources needed to effectively implement watershed management.

Coun. Rob Nicol noted that if Bill 229 goes ahead as presented, Schedule 6 would force municipal representatives to consider only the interests of their own municipality, and not the watershed as a whole.

“We as a town could lose our voice and the power to protect our residents based on science,” Nicol said, noting that Schedule 6 would “take away the ability to plan properly; it would create more delays in the process, and ultimately would give decisions, after failed appeals, to the Minister.”

If that happens, “this province could be in real trouble,” he said. “We need science-based decisions to protect our residents.”

Council voted to forward the letter with their endorsement to Premier Doug Ford, MPP Andrea Khanjin, the Ministers of the Environment, Conservation and Parks; Municipal Affairs and Housing; Finance; Natural Resources and Forestry, as well as AMO (Association of Municipalities of Ontario) and the Conservation Authorities.