Residents were invited to send in their questions, during a virtual Open House
Oct 20, 2020 6:30 PM By: Miriam King 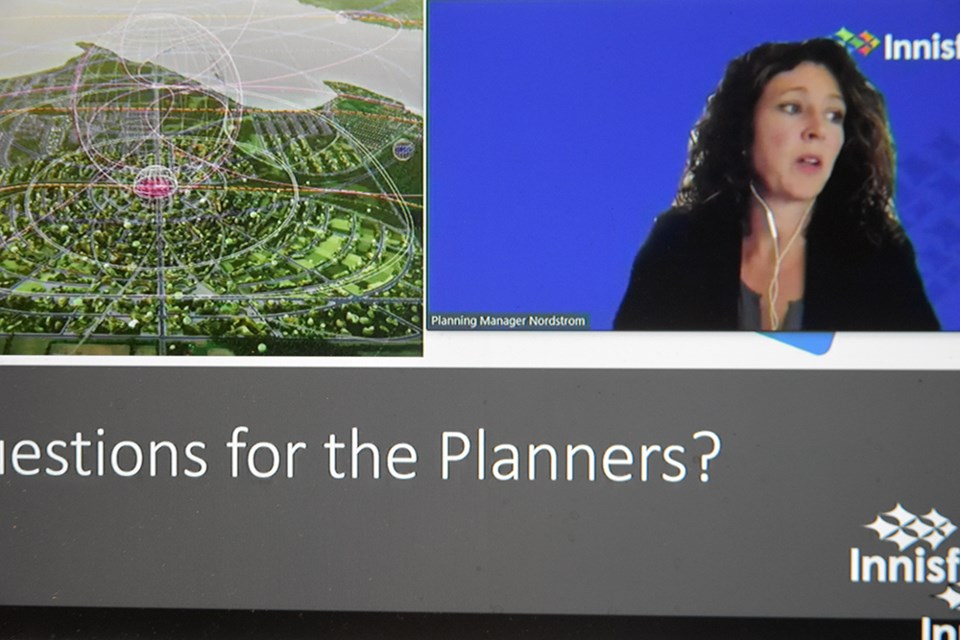 Questions started coming in even as Innisfil’s Director of Growth Tim Cane and Manager of Land Use Planning Mary Nordstrom provided the background on the Ministerial Zoning Order (MZO) being requested for the Mobility Orbit planned community and transportation hub.

The virtual Planning Open House on Monday, billed as “Ask a Planner: The Orbit,” was designed to provide information on the Town of Innisfil’s efforts to fast-track approvals for a new GO Train station on Line 6, surrounded by high density development that will add an estimated 7,000 dwelling units and 20,000 people in its first phases.

Cane outlined the connections between the 2012 plans for a GO Train station, and the Orbit vision, noting that in 2019 the RFP for the station was awarded to PARTISANS, “to see what the new station could look like.”

The proposal, developed with stakeholders like Metrolinx and Cortel Group and shown in artists’ renderings, is for a “utopian” city of the future – concentric circles of roads around a transportation hub, that become “squercles” or squared circles towards the edges of Orbit, to blend with the surrounding grid system of roads.

The MZO being requested from the Ministry of Municipal Affairs & Housing would set the outer boundary of the entire Orbit  – a radius of over 1 km. from the station itself – but only set densities and standards within the two inner-most circles, within 425 metres of the station.

Approved density within 225 metres of the station would be 200 dwelling units per hectare, with the tallest high-rises within the first 125 metres.

The minimum height is given as six storeys; planners were asked about the maximum. Cane suggested 20-25 storeys, as shown in artists’ renderings – enough to offset the developer’s cost of building a GO Station, but “not to have hyperdensity.”

In the second ring, from 225 to 425 metres, density would decrease to 150 units per hectare, with a minimum height of four storeys for apartment buildings, “softening” towards the outer edge to also include townhomes and heritage dwellings.

“There are still a lot of technical studies to do, on the environment, traffic,” Cane said. He noted that while neither the MZO nor an approved Site Plan can be appealed or challenged, the area beyond 425 metres will be subject to the Secondary Planning process, which is open to appeal.

Nordstrom described details of the Orbit, including the visionary GO station, linear park along the rail corridor and public plaza space surrounded by four to eight of the tallest mixed-use buildings, within the core of the plan - offering parkland, green infrastructure, amenities and flex workspace, among the non-residential uses.

“The MZO is capturing this vision,” Nordstrom said.

She was asked if the Open House was a “waste of time” – if town council has in fact already approved the vision and MZO, especially since the Minister of Municipal Affairs and Housing has been notified that the request for an MZO will be forthcoming.

“It’s never a waste of time,” said Nordstrom. “Council does have the option to change their mind.”

Some of the comments in the virtual Open House were positive, and enthusiastic.

“I am very excited about this initiative of providing alternative housing for Innisfil residents,” said Joy Adams.

Others were concerned that the town is pushing ahead without a way to ensure that the ‘vision’ will be built.

“What assurances do we have that a developer wants to build this?” asked Steven Kirshenblatt. He asked if the developers would be addressing the Open House; the developer was not represented.

Cynthia Gordon raised the same question. “What assurances are (there) that the developers will follow through with the plan? We have seen that things can change, with the Sleeping Lion plaza that was meant to be in the centre of the subdivision” – a reference to Cortel Group’s Sleeping Lion subdivision on Line 6 that did not deliver promised innovations in design.

They were told the MZO will require a master planning process in each quadrant, within the inner rings of high-density development.

There were repeated questions about the environment, and what controls would be in place. Cane said that the MZO process does not bypass environmental legislation, and that concerns would be addressed through Site Plan control.

As for a query about a campus of Royal Victoria Hospital within the Orbit, Cane said, “That hasn’t been determined yet” – but there are hopes the Orbit could attract, if not a campus, then flexible smaller health care options.  “We’d love them to be part of the Orbit.”

There were also questions about wastewater and water servicing, and the link between the Orbit and a proposed new interchange at the 6th Line Bridge.

Cane acknowledged that “the timing of that interchange has been moved up,” because of the Orbit and the projected increase in population. The developer, he said, had agreed to upfront the cost of the interchange.

As for the need to move forward with a sewage plant expansion because of the Orbit, the Innisfil developers group has signed an agreement to upfront 60 percent of associated costs.

The question of already-planned growth in areas like Line 9 was raised. Cane said those areas can still proceed. “It’s not growth in the Orbit above all else,” he insisted; areas like Line 9 “will remain to be considered.” The transit hub community will become its own growth area, “not at the expense of all others,” Cane added.

The County of Simcoe, which has been a stakeholder in discussions, has agreed that the Orbit will be recognized as a distinct area under the county’s Municipal Comprehensive Review.

Cane acknowledged that the town’s current planned growth can be accommodated within the existing urban boundaries, but suggested that the transit-based city of the future will create new demand.

“The feeling is the demand is there,” Cane said. “It’s certainly not a question of if, it’s a question of when” - although, in response to a query, he acknowledged that there have been no market studies that indicate demand for high-rise condominiums in the area.

The draft MZO includes principles of sustainability of design, adaptability, efficiency, as well as a requirement for 10 percent affordable or “attainable” housing. “It’s an opportunity for Innisfil to grow on its own terms,” said Cane.

What about schools, a key part of a complete community?

“Those discussions are ongoing,” said Nordstrom.

School boards were contacted “early on in the visioning exercise,” said Cane, and on Monday, submitted formal comments, not shared at the meeting. Planning for schools “is key for a community of any type, especially the Orbit,” he said.

One key question was when the GO station will be completed. The answer: current plans call for construction to begin in 2022, but the station is not expected to open until the first residential units are ready for occupancy, possibly in 2024.

So far, all that has been seen is an artist’s rendering of the station. Cane said that the design team is now working with Metrolinx on the actual design, to be presented in 2021.

“We don’t want a whistle-stop station,” Cane said, but a centre for future growth.

One resident asked if there was any proof that people prefer the futuristic Orbit to a ‘whistle-stop.”

Cane cited a survey on Get Involved Innisfil, where “400 to 500” respondents indicated a desire “to have a more integrated and future-proof station, rather than one where you just get on or off… That input was critical for us.”

Comments can still be submitted to the Town of Innisfil. Those received before Oct. 26 will be considered in preparing the final draft of the MZO, which comes to Innisfil Council on Nov. 4 for approval.

The Open House can be watched on the Town of Innisfil YouTube channel.

Innisfil girl among 30 new COVID cases in Simcoe-Muskoka today
Dec 2, 2020 1:31 PM
Comments
We welcome your feedback and encourage you to share your thoughts. We ask that you be respectful of others and their points of view, refrain from personal attacks and stay on topic. To learn about our commenting policies and how we moderate, please read our Community Guidelines.