HALIFAX — A teenaged girl who set out with her grandmother and mother last spring on a 1,800-kilometre RV trip to seek her new lungs has received the life-changing operation in an era of COVID-related delays.
Nov 21, 2020 7:00 AM By: Canadian Press 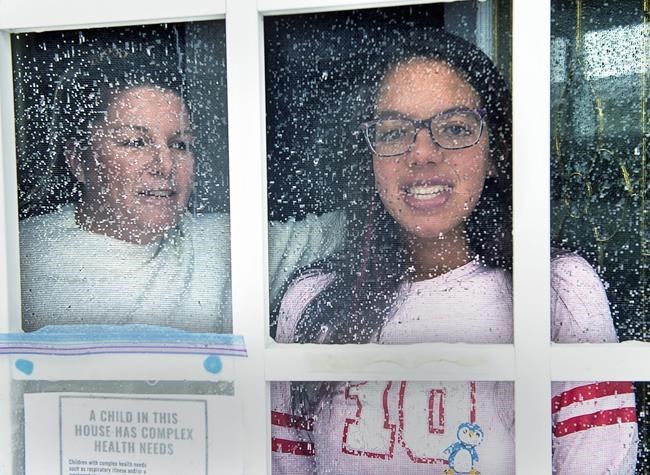 HALIFAX — A teenaged girl who set out with her grandmother and mother last spring on a 1,800-kilometre RV trip to seek her new lungs has received the life-changing operation in an era of COVID-related delays.

Tahlia Ali left Halifax on May 20 after receiving word that medical specialists preferred she be near the University Health Network and the Hospital for Sick Children in Toronto as the pandemic continued.

In June, when she last spoke to The Canadian Press, the 16-year-old said she felt ready for the oft-delayed operation, as her energy levels had fallen.

She says the initial surgery to repair two holes in Tahlia's heart was somewhat more difficult than expected because the heart was more enlarged than anticipated. Robichaud estimates the dual operations required 13 hours.

"I'm emotionally exhausted but exhilarated and a bit fragile after six months of waiting and not knowing when it would happen," Robichaud in an interview on Friday.

On Friday afternoon, a ventilator tube was removed, and Tahlia began to breathe on her own, Robichaud wrote in a follow-up email.

Tahlia's approval for a transplant came in February, but after the novel coronavirus surfaced, the family's plan to travel to Toronto for the operation was put on hold due to the pandemic.

There were also shortages of space at Ronald McDonald House, a charity that provides residences for families awaiting treatments, and the family had to stay in an AirBnB.

Robichaud says the next step for Tahlia is recovery for three weeks and then three more months in Toronto to be near the transplant facility for follow-up visits.

The Halifax teen has pulmonary hypertension, which leads to a lack of oxygen to blood vessels in the lungs, and she has had two holes in her heart since birth.

"This is the difficult time now of seeing Tahlia in ICU hooked up to 15 IVs and sedated," Robichaud said.

The director of the lung transplant program say Ali's case illustrates both the reality of delay and the program's continuous efforts to adapt to the pandemic.

Dr. Shaf Keshavjee said in an interview on Friday that the wait list climbed to about 100 patients as the virus caused shortages of intensive care beds, expert staff and organ donors.

Nonetheless, he says the teenager's story illustrates the program can prioritize an operation when there is a match in lung size and blood type from a donor and the treatment is urgent.

"I tried to reassure the family she would get done, and she's done," said Keshavjee.

"Her story says that, in the middle of COVID-19, we've been able to prioritize emergency surgery, and when it was unsafe to do transplants we did have to hold for a while," he said.

"We're up to full speed now, and the only limitation is organ donations. So Canadians should still focus on being organ donors so we can continue to save lives."

The doctor said as the second wave of the pandemic continues in Ontario, it presents challenges for the country's premier transplant centre. Keshavjee said before the pandemic there was a wait list of about 30 people, but it is now at 80 to 100.

Robichaud says few Canadian realize the costs and challenges involved in the transplant operations, as families must live in hotels for months awaiting their chance for the operation.

She has travelled to Toronto three times to assist and in December will bring Tahlia's younger brother to visit as well.

"It's at least another four months . . . before they (Tahlia and her mother) return home, but at least we are now able to move forward," she wrote.

This report by The Canadian Press was first published Nov. 21, 2020.

Indigenous leaders call for clarity, investigation into RCMP after B.C. shooting
May 12, 2021 4:00 AM
Comments