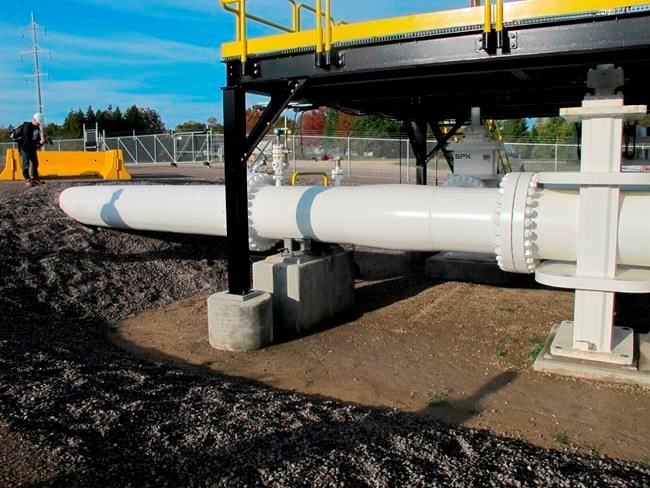 The Canadian and U.S. chambers of commerce joined forces with their counterparts in Ohio, Michigan and Wisconsin by filing a joint brief in court to argue against Gov. Gretchen Whitmer's bid to shut down the cross-border pipeline.

Wednesday marked Whitmer's original deadline for Enbridge to shut down Line 5, which she maintains poses an unacceptable environmental risk along the bottom of the Straits of Mackinac, which connect Lake Huron with Lake Michigan.

"The tunnel solution essentially eliminates the risk of an oil spill at the Straits of Mackinac," the chambers argue in their filing, known in legal parlance as an amicus brief.

The existing tunnel agreement with Michigan gives Enbridge the right to cancel the project entirely if the pipeline is forced to cease operations, even temporarily, they argue.

"Under the termination clause of two agreements ... if defendants comply with the state of Michigan order and involuntarily shut down the pipeline, then defendants can choose to terminate their obligations to construct such a tunnel."

The brief anticipates a scenario in which Enbridge is forced to temporarily shut down the line, cancels the tunnel project and then later receives a ruling that allows the line to start back up.

"The chambers urge the parties not to create avoidable short-term crises or put at risk the long-term solution (the tunnel) that they agree is superior to the status quo."

Enbridge said it would need to re-evaluate things should Line 5 be shut down.

"We believe in the tunnel project and believe it is a practical solution. If Line 5 were shut down as the governor desires, like any business whose ability to operate is interrupted we would have to reassess the situation," said an emailed statement sent by company spokesperson Jesse Semko.

"All that said, Enbridge completed the engineering and design phase of the tunnel project in March and is actively pursuing state and federal regulatory permits from state and federal agencies," the statement continued.

"And we remain committed to providing the people of Michigan and the Great Lakes region with safe, reliable and affordable energy."

The so-called "chambers brief" followed a similar filing Tuesday by the federal Liberal government, a rare international foray into U.S. legal proceedings, that urged the court to keep the pipeline running and the two sides to reach a settlement.

Wednesday's deadline was expected to pass without incident; talks with a court-appointed mediator are scheduled to continue past May 18 and Enbridge has said it has no plans to accede to Michigan's order.

That didn't discourage those opposed to Whitmer's efforts to speak their minds.

"Unfortunately, millions of Americans and Canadians are likely to pay the price for it."

Richard Studley, the head of the Michigan Chamber of Commerce, didn't mince words, either.

"Every Michigan governor I have worked with, until today, has treated our Canadian friends and neighbours with courtesy and respect," Studley told a news conference.

Enbridge, he said, has gone to great lengths to assuage the state's concerns, including with the tunnel, promises of round-the-clock monitoring, an emergency buoy system and keeping response teams on standby — "only to be demonized for political purposes."

"It's really very troubling to the entire business community, to see a governor and attorney general abuse their power like this," Studley said. "The question it raises in the general business community is, 'Who's next?'"

In their brief, the chambers spell out in detail a cascade of likely "severe, nationwide and international" consequences if the line is shut down — everything from fuel price spikes and supply shortages to an increase in traffic fatalities and greenhouse gas emissions as a result of more tanker trucks on the roads.

Oil transported by rail is nearly five times as likely to spill than oil carried by pipeline, and the risk of a spill involving a tanker truck is 10 times as high, said Aaron Henry, the Canadian chamber's senior director of natural resources and sustainable growth.

There's also a risk of interstate energy emergencies, the brief notes — a phenomenon already on display in several East Coast states as a result of the ongoing shutdown of the Colonial pipeline, a key energy artery that was targeted by a foreign cyberattack.

"I think the most important lesson to be learned from the shutdown of the Colonial pipeline is that actions have consequences," Studley said.

"Regardless of the motivation, shutting down a second regional, multi-state and international pipeline is virtually certain to have the same economic impact, which is negative: higher prices, lost jobs and a disruption of the daily lives of both individuals and employees and employers."

The Colonial crisis again prompted public officials Wednesday to confront the mission-critical reality of America's pipelines as they urged people to stay calm and to resist the temptation to hoard fuel.

"I do think it reminds us that we need to make sure that we have the more resilient and flexible infrastructure for the future, especially when it comes to something like energy," said U.S. Transportation Secretary Pete Buttigieg.

Both the Colonial shutdown and the collapse of the electrical grid in Texas during a severe cold snap in February should serve as "major wake-up call experiences," he added.

The White House refused again Wednesday to talk about Line 5 publicly, noting that it remains before the courts, although press secretary Jen Psaki dismissed the notion that the dispute in Michigan risks impairing Canada-U.S. relations.

"We've talked in here about how important of a partner Canada is, and will continue to be on a range of issues," Psaki said. "But this, again, is an issue before the courts, so I'm not going to have more comment on it."

This report by The Canadian Press was first published May 12, 2021.

MPs scramble to pass priority bills before summer but they could stall in Senate
Jun 23, 2021 5:20 PM