Australian Craig Jones has spent the global pandemic training with a few trusted friends in the New York area. And every few weeks, the Brazilian jiu-jitsu ace twists an opponent into a pretzel and forces a tap.
Jul 10, 2020 7:30 AM By: Canadian Press 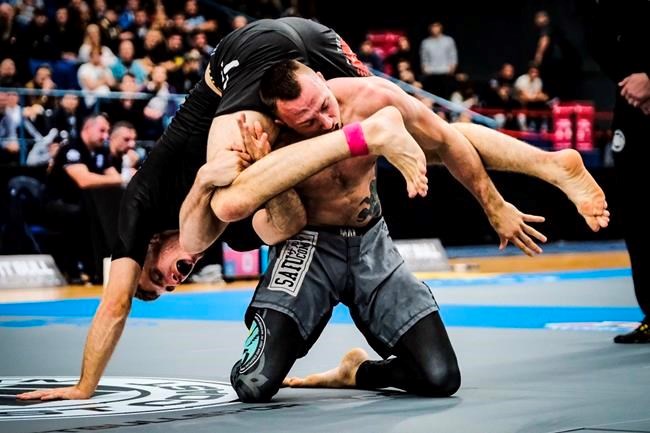 Australian Craig Jones has spent the global pandemic training with a few trusted friends in the New York area.

And every few weeks, the Brazilian jiu-jitsu ace twists an opponent into a pretzel and forces a tap. On Sunday, he will look to add American Mason Fowler to that list in the main event of Submission Underground 16 in Portland — a promotion run by former UFC star and current ESPN MMA analyst Chael Sonnen.

Jones, who turns 29 on July 17, has been honing his submission wrestling skills in the shadows during the pandemic.

"We've just been training basically in secret the whole time," he said in an interview. "Just as a small group, trying to avoid the health inspectors and stuff. But keeping it to a small group. No one has got sick or anything."

Jones has become a force in submission wrestling, a form of no-gi grappling that can be contested with or without points. The Australian is a master of leglocks, usually dropping down into a seated guard and then inviting opponents into his octopus-like guard.

Jiu-jitsu is a game of chess and Jones' gambit can be deadly. Opponents are often so wary of his leglocks they leave themselves open to other threats.

But it is also an ever-evolving sport with competitors studying ways to blunt Jones' attack, often by refusing to rush in as they might have done in the past.

"It's pretty incredible what he's capable of doing and how he's capable of putting everything together and rising to the occasion — and in some ways just be a step ahead of everyone," said Victoria MMA fighter Sarah Kaufman, a PFL, UFC, Invicta and Strikeforce veteran who fought at Submission Underground 5.

"Even as people continue to find little solutions to his puzzle, he creates new ones and opens up something else," she added. "So it's pretty masterful work.

"That's not to say he won't be beaten because it's jiu-jitsu and grappling and at some point you get caught ... But I just think that his intellectual capacity for jiu-jitsu and the knowledge base that he has for his own systems and his own series of techniques is very impressive."

Canadian UFC fighter Gillian (The Savage) Robertson was supposed to compete on Sunday's card but had to pull out when one of her training partners tested positive for COVID-19. Robertson, a native of Niagara Falls, Ont., who fights out of Coconut Creek, Fla., has since gone into quarantine.

Originally from Adelaide, Jones moved to Melbourne in 2015. He lived out of a suitcase for several years before finally getting an apartment in Hoboken, N.J. He has not been back to Australia since last October.

"I was just full-time travelling ... Australia's a great place to live but if I want to head to London, that's 24 hours of travel time. If I want head to LA, that's a 16-hour flight," he said. "It was really wearing me down."

In the past, Jones arranged seminars around so-called Super Fights to help pay the bills. He recalls one competition in London that was surrounded by 20 seminars in 21 days across different parts of the U.K. and Ireland.

"I probably picked the craziest time to move to New York," he said. "Since I've been here it's been nothing but chaos. It's been stay at home, there's been protests in every part of the city. there's looting."

Still he had found a home amidst the chaos.

Jones need just 12 seconds to dispatch Hallman, a veteran of the UFC, Strikeforce, IFL and other MMA organizations, by a heel hook. Johnson, who twice fought for the UFC light-heavyweight title, lasted 47 seconds despite having 70 pounds on Jones.

Burns, who was slated to fight for the UFC welterweight title this weekend at UFC 251 before contracting COVID-19, went 64 seconds.

"It would definitely be probably my favourite of the Super Fight shows to work with," said Jones. "I like the rules set, I like having Chael behind it."

Sonnen, who retired in 2019 after a distinguished career that saw him fight for both the UFC middleweight and light-heavyweight titles, knows Jones' skills firsthand. He lost to the Australian in a Super Fight at the 2017 ADCC (Abu Dhabi Combat Club) World Championship.

Submission Underground bouts are contested in a cage with no striking. If there is a no winner after five minutes, the contest goes to overtime with three two-minute rounds where fighters have to secure a submission or escape their opponent.

Sonnen's promotion had been a good fit for Jones, who essentially competes there every three weeks. Fowler, his next opponent, won a US$10,000 eight-man tournament to earn the right to face the Australian on the weekend.

The six-foot Jones, who competes in the 88-kilogram division, won by submission with 34 seconds remaining when they met in the 2019 ADCC quarterfinals.

When the world isn't in lockdown, Jones faces a busy schedule in a sport that goes year-round.

Major competitions include the ADCC World Championship, held every two years. The Eddie Bravo Invitational has also been a seminal competition in the sport.

Then there are Super Fight events like Sonnen's promotion.

Instructional DVDs are the primary source of Jones' income. While he still does seminars, he tries to do them in separate tours so they don't impact his training. Jones was doing a seminar tour of the U.S. that he had to cut short when the pandemic struck.

He is grateful that he has made a career out of BJJ, while admitting it comes at a cost.

"It is a grind. You've really got to love suffering in the gym if you're going to be a pistol in this lifestyle. It's seven days a week. I take a day off only when I really have to. Basically my whole life revolves around the next Super Fight I have coming up."

He admits it's hard to squeeze in a personal life.

"I like to rest as hard as I train, So basically I forgo all social events. I go to bed early, 9 p.m. I really try to take care of my diet. It's a one-track focus.

"I like to think of an athlete as (having) a short shelf life. I can enjoy my life a bit later on."

Jones got into BJJ as a teenager with an eye to mixed martial arts down the line. While a move to MMA is still possible, he says making the switch isn't as simple as it once was.

"It's a difficult decision these days," he said. "Because grapplers used to get paid no money so a lot of the elite-level guys would get into MMA to make money. But these days you can make a pretty decent living in grappling so it makes it almost less enticing to make the jump across."

Jones turned heads at the 2017 ADCC in Espoo, Finland, arriving as somewhat of an unknown after winning the lightly regarded ADCC Asian trials. He promptly upset a pair of marquee names in Leandro Lo and Murilo Santana en route to a fourth-place finish.

"It was just a perfect recipe for the whole underdog story," said Jones. "That really captivated everyone and really boosted my career."

Jones' passport could read administering pain as a profession, albeit with a friendly handshake before and afterwards. He says he also takes his lumps but minimizes them by tapping. Others don't, with ego sometimes coming into play.

"That's the problem with the heel hook submission," Jones said, "Quite often the pop comes before they have the time to tap. So you cannot hesitate at all."

Magalhaes was slow to tap at SUG 13, suffering a broken fibula and dislocated ankle.

Jones explains the move by saying he tries to isolate the ankle and the hip, then uses his hip to try and move through the opponent's knee. That attacks the ligaments in the knee.

"Quite often the outside heel hook will break people's ankles and the inside really targets the knee," he said.

Jones trains with John Danaher, a renowned BJJ black belt who was one of Canadian MMA star Georges St-Pierre's coaches. He enjoys competing against MMA fighters, testing himself against elite athletes with demanding training regimens.

Another training partner is ADCC world champion Gordon Ryan, an American considered one of the greatest ever no-gi grapplers.

Jones has taken him on three times.

"And I've lost all three, sadly," he said with a laugh.