Unable to get a visa in time for a short-notice UFC fight in Las Vegas last month, Canadian Kyle (The Monster) Nelson now finds himself in Abu Dhabi at the UFC's Fight Island. The 29-year-old featherweight from Huntsville, Ont.
Jul 10, 2020 11:10 AM By: Canadian Press 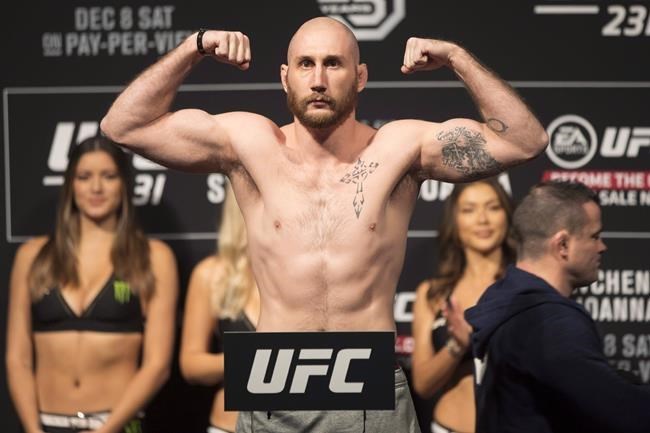 Unable to get a visa in time for a short-notice UFC fight in Las Vegas last month, Canadian Kyle (The Monster) Nelson now finds himself in Abu Dhabi at the UFC's Fight Island.

The 29-year-old featherweight from Huntsville, Ont., who has undergone three COVID-19 tests and two quarantines already in the last week, is helping corner a teammate but is ready for anything.

"I'm still in shape and ready to go," he said. "Now that I'm here on Fight Island, they have four shows coming up. If anything happens, somebody gets hurt or something, here, maybe I can jump in on short notice."

To get there, Nelson had to fly to Las Vegas, get tested for COVID-19 and go into quarantine until the results came through. He then boarded a 15-hour flight to the United Arab Emirates for more of the same.

Nelson is cornering Romanian flyweight Diana (The Warrior Princess) Belbita, who takes on Russia's Liana (She Wolf) Jojua on a televised Fight Night card on July 15. Belbita (13-5-0) trains with Nelson at the House of Champions gym in Stoney Creek, Ont.

They landed Tuesday night, were given another COVID test and greeted at the hotel by staff in full protective gear. They got to their hotel rooms at about 3 a.m. local time to kick off a 48-hour quarantine.

"I don't think there's any way you could really make it any safer," Nelson said.

The Canadian has occupied himself by hitting some pads with his coach in his hotel room and exercising on his eighth-floor balcony in 40-degree Celsius heat.

"We've still been able to stay in shape but I was going a little crazy in the hotel room, though," he said.

"The hotel is super-nice and the staff has been great," he added. "They've been supplying all the food for us, bringing the food up and everything. So definitely no complaints there," he added.

The flight to the United Arab Emirates was long but fairly comfortable.

Belbita and the other fighters were in first class. Nelson and her two coaches were in the back of the plane but everyone had space — Nelson had a block of four seats to himself so was able to stretch out and sleep.

In partnering with local authorities, the UFC has created its own bubble on Yas Island, which boasts amusement parks, malls and a Formula One racetrack.

The location has allowed the UFC to fly in fighters from all over, avoiding U.S. travel and other restrictions. The Octagon is housed in an air-conditioned hangar complete with portable rooms where fighters and their camps as well as officials can set up fight night. There is also a training Octagon set up on the beach.

Nelson (13-3-0) was slated to face Sean (The Sniper) Woodson at a catchweight of 150 pounds June 27 at the UFC's Apex production facility.

The UFC has put together cards on short notice recently as it looks to gets its schedule back on track despite the global pandemic. Nelson, on less than three weeks notice, was unable to get his visa in time although he was able to get to Las Vegas last week.

"i still don't know if I technically have a visa to make money yet in the States," he said.

This report by The Canadian Press was first published June 10, 2020.