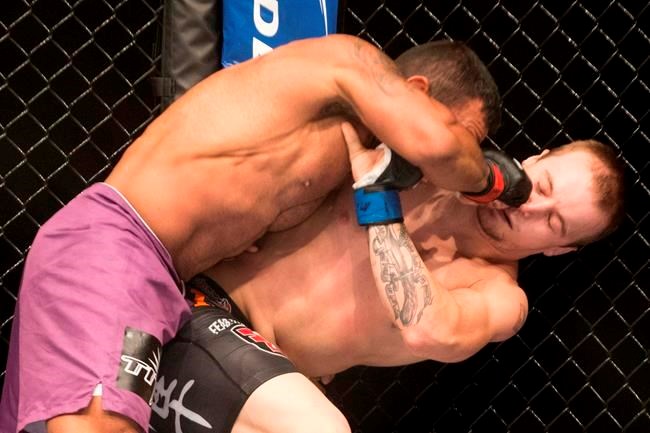 The 30-year-old from London, Ont., was initially slated to face Oleksandr Doskalchuk on the July 18 Fight Night card headlined by flyweights Deiveson Figueiredo and Joseph Benavidez. But Doskalchuk was forced to withdraw due to medical issues, according to the UFC.

Gordon will now face Sweden's Amir (The Prince) Albazi (12-1-0) in a battle of UFC newcomers.

Ronson (21-10-0) is stepping in for the injured Danny (Hot Chocolate) Roberts against Denmark's Nicolas (Lokomotivo) Dalby (18-3-1) on the July 25 Fight Night card headlined by middleweights Robert (The Reaper) Whittaker and Darren (The Gorilla) Till.

Ronson, a 34-year-old from London, Ont., last fought in the UFC six years ago.

With four cards scheduled back-to-back on Abu Dhabi's Yas Island, UFC matchmakers have been kept busy in this era of COVID-19.

The UFC says six fighters have been withdrawn from the cards after testing positive for COVID-19. All six were flagged before they left for Abu Dhabi.

The July 15 Fight Night card, headlined by welterweights Calvin (The Boston Finisher) Kattar and Dan (50k) Ige, has seen four fighters drop out due to COVID-19.

Bantamweight Anderson dos Santos and Vinicius Moreira have been removed from their bouts against Jack (Tank) Shore and Modestas Bukauskas, respectively, after testing positive.

Aaron Phillips returns to the UFC to face Shore, while Greece's Andreas Michailidis makes his UFC debut against Bukauskas.

The co-main event between Pedro Munhoz and Frankie (The Answer) Edgar was scrapped earlier after Munhoz tested positive.

Middleweight Dusko Todorovic also tested positive and has been replaced by UFC newcomer Khamzat Chimaev, who will take on John (The Welsh Wrecking Machine) Phillips.

Welterweight Shavkat Rakhmonov has dropped out of the July 25 card due to injury. UFC newcomer Niklas Stolze steps in to meet Ramazan Emeev.

Bantamweight Umar Nurmagomedov has withdrawn from his bout against Nathaniel Wood due to the passing of his uncle and head coach, Abdulmanap Nurmagomedov. Wood will now face Dana White Contender Series veteran John Castaneda.

A light heavyweight bout has been added between Paul Craig and Gadzhimurad Antigulov, as well as a lightweight matchup between Francisco Trinaldo and Jai Herbert.

The fight between Marina Rodriguez and Carla Esparza has been moved from July 15 to July 25 after one of Rodriguez’ corner team members tested positive.