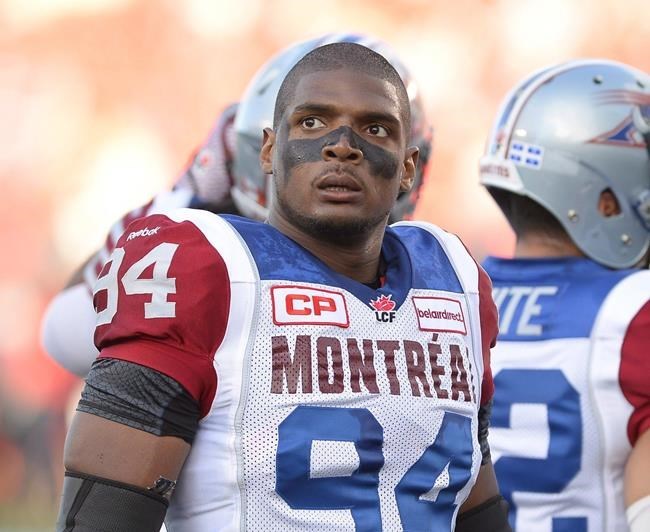 He feels Sam helped pave the way for a historic moment on Monday night.

Brodeur-Jourdain and Sam were both players with the Alouettes in 2015, a year after the latter became the first openly gay player to be drafted into the NFL. Seven years after that draft, Carl Nassib, a defensive end with the Las Vegas Raiders, became the first active NFL player to come out as gay on Monday in an Instagram post.

Sam was selected in the seventh round of the '14 draft by the then-St. Louis Rams and also spent time on the Dallas Cowboys practice roster before coming to the CFL.

The former Missouri All-American defensive end played just one game with Montreal — appearing in 12 plays in a 26-23 loss to Ottawa Redblacks — before stepping away from football for mental health reasons.

"I was happy that (Nassib) had the courage. There's nothing more peaceful than being yourself . . . and that's massive courage to come out and say, 'Hey, I am who I am. This is who I am. I'm proud of being myself.'"

Nassib plans to donate US$100,000 to the Trevor Project, a non-profit program that seeks to prevent suicides among LGBTQ youth.

Nassib was a 2016 third-round pick of the Cleveland Browns out of Penn State. He signed a three-year, US$25-million deal with the Raiders in 2020.

Sam didn't immediately respond to an interview request, but took to social media to comment on Nassib's announcement.

"Carl Nassib thank you for owning your truth and especially your donation to the Trevor Project," Sam tweeted. "LBGTQ people are more likely to commit suicide than heterosexuals.

"I hope and pray people will take note to this. Thank you again Carl and look forward to seeing you play on the field."

Brock McGillis, one of the first men's professional hockey players to come out as gay, echoed Sam's sentiments.

"To be able to live your life freely is a tough thing to try and navigate and to do it in a hyper-masculine professional team sport like football, is even more difficult," said McGillis. "The fact that he can and is, the fact that he has the perseverance and mental toughness to make it there, is incredible.

"Beyond everything else, I'm just so happy for him."

McGillis, a native of Sudbury, Ont., and a former goaltender, now works as an LGBTQ advocate, speaking with hockey teams and schools about being more inclusive. He agreed with Nassib that representation matters, especially for members of the LGBTQ community.

Brodeur-Jourdain said Alouettes players were familiar with Sam's story when he joined the CFL franchise. He said the only standard the Alouettes held the former Missouri star to was his ability to help the club win a Grey Cup.

"We knew about who Michael Sam was," Brodeur-Jourdain said. "We're aware of the news, we're aware of what's happening in the world in general.

"But we would base our evaluation as players back then on what he was bringing (to the field)."

Trouble was, the six-foot-two, 261-pound Sam had difficulty adjusting to the nuances of a different game that was played on a longer, wider field and with different rules, not the least of which was having to line up a yard off the ball.

"That was so hard for him," Brodeur-Jourdain said of the yard between the two lines. "He had football skills, he had an amazing college career and it was obvious there was something to him.

"But it (Canadian football) is a different game . . . it's just different football."

Brodeur-Jourdain, 38, played 11 seasons with Montreal following his collegiate career at Laval. A two-time Grey Cup champion with the Alouettes, he retired in 2019 before embarking on a coaching career with the CFL franchise.

In a perfect world, Nassib's declaration wouldn't generate as much attention as it did, Brodeur-Jourdain said. He hopes it not only will make it easier for others to follow suit but also create an environment where such public statements are not nearly as newsworthy.

"Just be yourself," Brodeur-Jourdain said. "Barriers are made to be broken to make the world in general easier.

"As soon as we can say, 'Hey, be who you are,' the world is going in a better direction."