NHL's road to Edmonton and Toronto featured plenty of obstacles

Since early March, the novel coronavirus has affected almost every decision facing the NHL.
Jul 11, 2020 9:51 AM By: Canadian Press 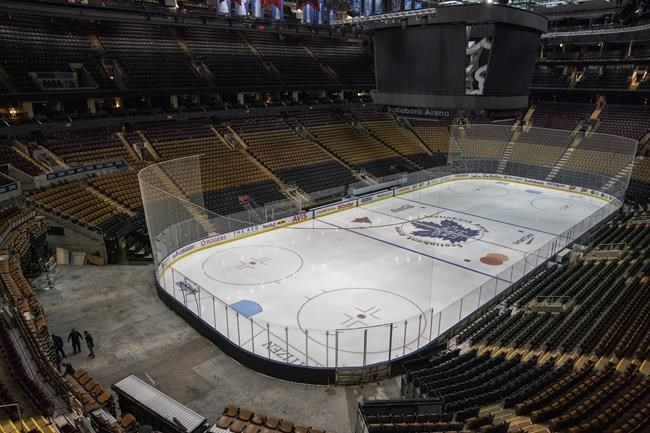 Since early March, the novel coronavirus has affected almost every decision facing the NHL.

Almost four months after halting play, the league announced Toronto and Edmonton will serve as hub cities Friday for the potential resumption of play later this summer.

Here's a look at the NHL's journey through the health crisis:

March 4: NHL commissioner Gary Bettman says the league is "aware of and focused on all possibilities" related to the novel coronavirus outbreak at the league GM meetings in Boca Raton, Fla.

March 9: The league starts closing locker-rooms to non-essential personnel because of COVID-19 concerns.

March 12: One day after the NBA suspends its season when a Utah Jazz player tests positive for COVID-19, the NHL and many other leagues also halt play.

March 13: Bettman says players and staff have been told to stay away from the rink and self-isolate.

March 16: NHL players are told they can go home and must self-isolate there until at least March 27.

March 17: An Ottawa Senators player tests positive, becoming the first NHLer to be diagnosed with COVID-19. Six members of the organization eventually test positive after a California road trip.

March 25: League postpones its draft, draft combine and awards, all set for June.

April 7: For the first time since play was halted, Bettman raises the possibility of the regular season not being concluded.

May 3: Prime Minister Justin Trudeau says NHL players would have to follow quarantine rules for play to resume in Canada.

May 13: Bettman says the NHL has no plans to cancel the rest of the season.

May 26: Bettman announces 24 teams will be back on the ice if the NHL resumes play. The plan has a play-in round followed by traditional playoffs. Bettman says the league wants to have two cities serve as hubs — without fans in attendance — adding that 10 remain on the short list, including Edmonton, Vancouver and Toronto.

June 11: League announces NHL training camps will open July 10 if the league and players' union can reach an agreement to resume the season.

June 19: The federal government approves the NHL's proposal of a cohort quarantine, raising the possibility of a Canadian city becoming a hub. It would keep players separate from the general public, rather than require players to isolate individually for the two-week period.

June 20: The Toronto Maple Leafs refuse comment on two newspaper reports that star centre Auston Matthews tested positive. Meanwhile, the league says that it has tested more than 200 players at club facilities during voluntary training since June 8, with 11 testing positive.

June 22: Columbus learns it will not be a hub city.

June 23: Pittsburgh says it won't be a hub city. Later, Minneapolis/St. Paul and Dallas fall off the list.

June 25: The Canucks announce Vancouver will not be a hub city. British Columbia Premier John Horgan expresses his disappointment at the decision, but says the province will not bend public health guidelines aimed at preventing the spread of COVID-19.

June 26: The league holds its draft lottery, with a placeholder team winning. It means one of the teams that loses in the play-in round will get the No. 1 pick.

July 1: With cases surging in the United States, multiple reports say the league is on the verge of choosing Edmonton and Toronto as hub cities.

July 5: The NHL and NHL Players' Association agree on protocols to resume the season.

July 10: The NHL confirms Edmonton and Toronto will be hub cities, with play resuming Aug. 1.

Siakam scores 26 points and Raptors beat Memphis to clinch No. 2 seed in East
Aug 9, 2020 6:24 PM
Comments
We welcome your feedback and encourage you to share your thoughts. We ask that you be respectful of others and their points of view, refrain from personal attacks and stay on topic. To learn about our commenting policies and how we moderate, please read our Community Guidelines.