EDMONTON — Joe Pavelski tied it with 31.4 seconds left in the third period, Anton Khudobin stopped all three shots he faced in the shootout and the Dallas Stars beat the St. Louis Blues 2-1 in round-robin play Sunday to clinch the No.
Aug 9, 2020 6:34 PM By: Canadian Press 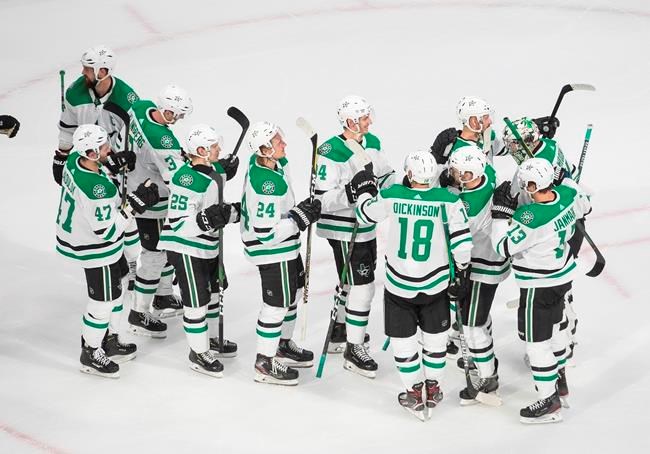 EDMONTON — Joe Pavelski tied it with 31.4 seconds left in the third period, Anton Khudobin stopped all three shots he faced in the shootout and the Dallas Stars beat the St. Louis Blues 2-1 in round-robin play Sunday to clinch the No. 3 seed in the Western Conference.

After Denis Gurianov scored the only goal of the shootout, Dallas will face the Calgary Flames in the first round of the playoffs. The Stars have some momentum going into that best-of-seven series after picking up their first win of any kind since Feb. 25.

“This game kind of re-established our game and got us back to an understanding of what it takes,” Pavelski said. “Relief? No. Confidence a little bit, and we’ll keep moving forward."

Defending Stanley Cup champion St. Louis went winless in the round robin and will next face the Vancouver Canucks. The Blues dropped from first in the West when the NHL season was halted in March to the conference's fourth seed.

“We definitely didn't play our best in these three games, but I think we've progressively gotten better,” said goaltender Jake Allen, who stopped 18 of the 19 shots he faced in his first action of the NHL's restart. “(The Canucks are) a great team. They’re fast, they're young, they're skilled and it’s going to be a challenge for us.”

Khudobin made 12 saves in regulation and overtime for the Stars, who were without top Tyler Seguin and starting goaltender Ben Bishop. The team said they were “unfit to play," and coach Rick Bowenss termed them “day to day.”

Jordan Binnington did not dress, though Blues coach Craig Berube said last year's Cup-winning goalie is healthy. Robert Thomas scored on the first shot of the game, and St. Louis didn't have another goal the rest of the way.

The Blues scored first in all three games, but couldn't hold any lead.

"We’ve shown and we're confident that when we play our game and play the way we want to, we’re a tough team to beat," Thomas said. “It’s obviously a little bit disappointing, but for us it was about finding our game and we started finding it today.”

The two teams that played in the 2019 Cup Final, the Blues and Boston Bruins, each went 0-3 in round-robin play to go from first to fourth.

“They’re a defending Stanley Cup champion, had a good regular season,” Bruins coach Bruce Cassidy said of the Blues. “Is the mental edge there for them yet, or is it because they’re a bigger, heavier team it takes them a while to sort of wear teams down?”

Cirelli scores in OT, Lighting beat Isles to reach Cup Final
Sep 18, 2020 12:15 AM
Comments
We welcome your feedback and encourage you to share your thoughts. We ask that you be respectful of others and their points of view, refrain from personal attacks and stay on topic. To learn about our commenting policies and how we moderate, please read our Community Guidelines.