Nick DeLeon likes space. So life in the MLS is Back Tournament bubble has its challenges for the veteran Toronto FC midfielder. "Training, eating, hanging out in the hotel. Rinse and repeat," he said with a chuckle. But DeLeon has no complaints.
Jul 10, 2020 10:56 AM By: Canadian Press 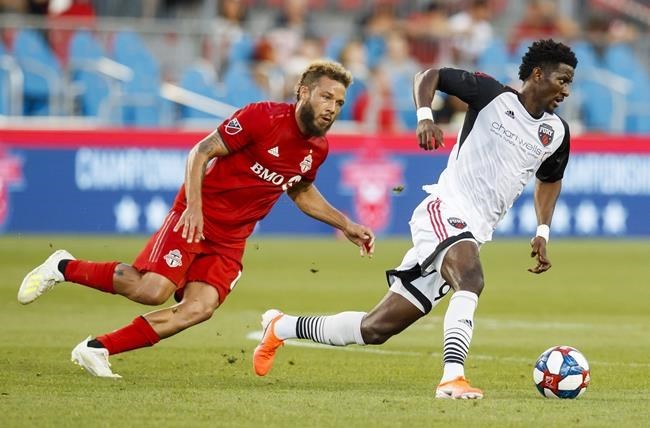 Nick DeLeon likes space. So life in the MLS is Back Tournament bubble has its challenges for the veteran Toronto FC midfielder.

"Training, eating, hanging out in the hotel. Rinse and repeat," he said with a chuckle.

But DeLeon has no complaints. He is looking forward to returning to action this weekend and says Major League Soccer has done its best to look after the players in what is uncharted territory for sports.

DeLeon and Toronto kick off their tournament against D.C. United on Sunday in a challenging 9 a.m. ET start at ESPN's Wide World of Sports complex in the Orlando area.

Games have been scheduled in the morning and evening to avoid the Florida heat. Toronto was initially handed just one 9 a.m. start in its three group games but the schedule had to be rejigged after Toronto arrived late at the tournament due to additional COVID-19 testing.

The matchup with D.C. United was shifted from Friday evening to Sunday morning. That means Toronto has two early wake-up calls, with its July 21 game against New England also a morning affair.

"It does present some challenges for sure,'' Toronto coach Greg Vanney, speaking prior to the schedule reveal, said of the early kickoffs. "We'll figure it out.

The forecast for Sunday calls for a temperature of 30 C at kickoff, which will feel like 36 C. There's a chance of a thunderstorm around the final whistle.

A native of Phoenix, DeLeon spent two years at UNLV and endured more than few sticky summers playing for D.C. United. But he's not a fan of the Florida humidity.

"My body feels great, minus this humidity. It's definitely hit me. It's smacked me in the face, you can put it that way," he said.

The 29-year-old DeLeon has to rack his brain to remember the last time he played a game so early.

"It's been a long time," he said. "That takes me back to youth days. That's kind of unique. And that's why we're training in the morning. We'e trying to get into that cycle to prepare us for the early kickoff on Sunday.

DeLeon has been setting his alarm for 6 a.m. for training and expects to have to push that to 5:15 a.m. on Sunday. Prior to the tournament, Vanney said the 9 a.m. start would likely require a 5:30 a.m. pre-game meal and meeting.

"Which isn't too bad for me. I know it impacts some other guys a little more," said DeLeon. "I have two young kids who wake up pretty early so I'm used to getting up early. But that's definitely different for some guys, for sure."

DeLeon's wife and kids left Toronto some three weeks ago to be with his wife's family in Kentucky during the tournament. They have a better support network there, which reassures DeLeon.

But he feels incomplete without them.

"You've got no idea ... I'm definitely missing them like crazy," he added. "Some days more than others."

He reaches out to them "at least once a day."

"For me, it's weird. When I Zoom them, it makes me miss them even more," he said. "It does something to my mentality and my emotions when I see them but I know I can't hug them, kiss them, be present with them. It's difficult."

He says it takes 30 minutes to regain his equilibrium after talking to them.

The buildup to coming down to Florida was the most stressful part.

"The unknowns were where a lot of the anxiety laid," he said. "Once you got down here, it was really organized. There were a couple of little issues here and there that guys were vocal about and MLS jumped on it and solved them really quickly."

"Other than that, I feel like they've done a really good job to keep this bubble safe. You can tell they've put a lot of care and thought into this whole project."

While the Swan and Dolphin Hotel, where all the MLS teams are staying, is not home, DeLeon says MLS has done its best.

The Toronto players get tested every other day for COVID-19. Aside from hanging out in their rooms and eating in the team meal room, there is also a lounge for the TFC players complete with a poker table, ping-pong table and video games.

Players can also access a couple of swimming pools or try their hand at bocce ball.

"There are little releases to kind of get you out of your room if you want to," DeLeon said. "But the new kind of norm now is everywhere you go you've got to wear that mask."

The training fields are in great shape, he reports.

Even though FC Dallas and Nashville SC have been forced to withdraw from the tournament after 19 members of their travelling parties tested positive, DeLeon says the bubble has done its job to date by limiting transfer to other teams.

But he knows how hard the Dallas and Nashville players worked to get ready for their return to action.

"My heart goes out to them," he said.

DeLeon spent the first seven years of his MLS career at D.C. United before joining Toronto in December 2018. He signed a new contract in April 2019 that will keep him in Toronto through the 2021 season.