Two-thirds of the new cases in Simcoe County have been confirmed or screened positive as variant strains, which prompted the medical officer of health to ask for more restrictions for the region
Mar 2, 2021 5:45 PM By: Erika Engel 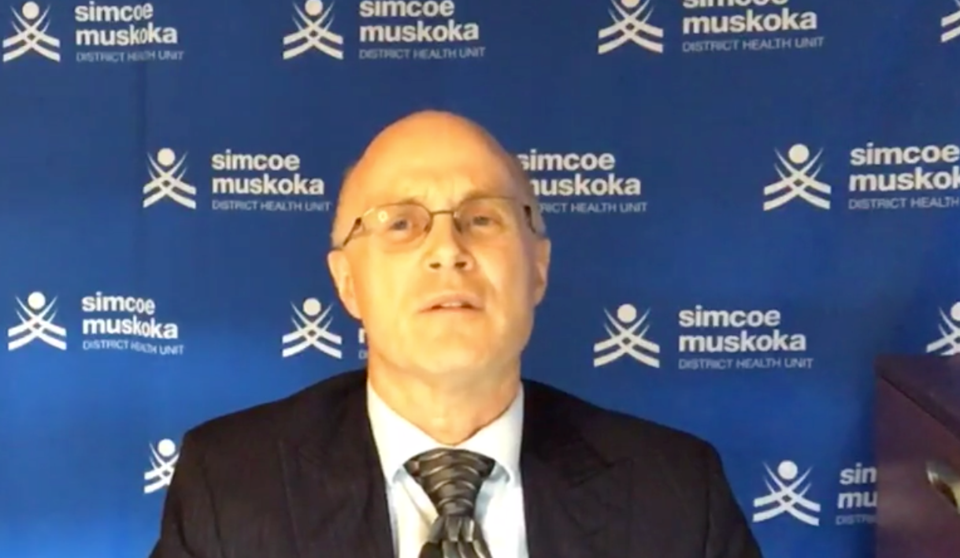 The region’s health unit is fielding 10,000 calls per day, and the medical officer of health said he has hundreds of emails, most from those in opposition to the lockdown that began March 1.

Dr. Charles Gardner, medical officer of health for the Simcoe Muskoka District Health Unit, said he has read them and takes them seriously. He said they will inform his future advice to the province on what restrictions should be in place in the region.

The doctor has been publicly scorned and criticized by residents, business owners and municipal politicians who are opposed to the lockdown. An online petition has garnered more than 20,000 signatures.

Many have said the numbers do not warrant the restrictions.

Ultimately, the decision to move Simcoe-Muskoka into lockdown was made by the province, but Gardner acknowledged his advice played a significant role in the decision. The restrictions of the lockdown are dictated by the province’s COVID-19 Response Framework.

Gardner was asked if he regrets his recommendation. He acknowledged the level of opposition forces him to question the situation.

“I have become concerned about (loss of public trust) given the reaction,” Gardner said. “It’s top of mind to me. One can only go forward, I am committed to good process, good communication, clarity about what we’re doing.”

The reason that pushed him to call for more restrictions, does remain a concern.

Simcoe-Muskoka has seen more confirmed B.1.1.7 variant cases than any other health unit in the province, with two-thirds of all new cases now screening positive as variants of concern.

“We know from experience in other countries, it’s more communicable and it comes to dominate as the strain in the community,” said Gardner. “We expect that, in fact, variants of concern will take over completely, or mostly.”

The variant strains have been shown to be more transmissible, requiring less contact for shorter duration to be passed from one person to another. In response to variant strains, Ontario has reduced the threshold for what constitutes "high-risk" exposure to anything more than passing by someone provided you're not wearing medical-grade personal protective equipment (PPE). Before the variant strain, the provincial standard for high-risk exposure was 15 minutes of close contact with someone.

Gardner said he’ll be watching the impact of the variant strains on the total number of cases in the region.

“The real question is what does that to do the total case count, does it cause it to skyrocket up or not impact it at all?” he said.

The doctor has also been criticized by local political leaders.

Gardner said he would be reaching out to all 26 councils with a letter he had already sent to area chambers of commerce for businesses. He also has calls weekly with CAOs of Simcoe County and Muskoka municipalities, and spoke at a media conference Sunday to reiterate it was the spread of variant cases and an increase in variant outbreaks that let him to ask for more restrictions.

“I have a lot of focus (on variants of concern) right now,” Gardner said. “And I believe the whole community does given the main rationale for declaring this district to be in lockdown is because of our very large number of variants of concern in our district.”

There have been 191 confirmed B.1.1.7 cases and another 352 cases have screened positive and are being sequenced to determine the variant strain.

Of the variant cases, more than half are now considered sporadic, meaning they aren’t linked to any outbreaks.

There are 10 outbreaks that are linked to variant strain COVID-19, including two restaurants, one personal care service, a manufacturing facility, an agricultural setting, and the rest are health-care institutions. At the beginning of the month, there were three outbreaks tied to variant strains.

The Simcoe Muskoka District Health Unit has the highest number of confirmed B.1.1.7 cases in the province.

As of Tuesday, there are six active B.1.1.7 cases in Simcoe County and 125 active cases in the region that have screened positive for a variant.

If the overall case counts don't grow, Gardner said he is hopeful the region would be able to move out of lockdown status in a "fairly short period of time."

"I can't identify exactly how quick that would be," he said.