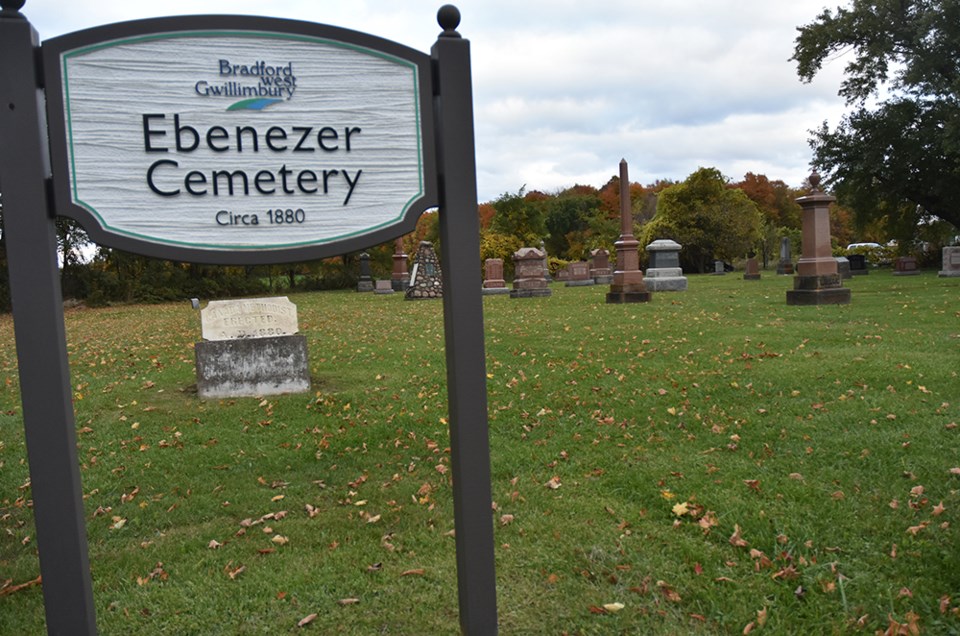 A view of the Ebenezer United Church pioneer cemetery on Yonge Street.Miriam King/Freelance

The County of Simcoe is moving ahead with plans to widen Yonge Street (County Road 4) from 2 to 4 lanes, in an effort to address traffic congestion and growth needs at the south end of the county.

The line of fencing cuts through fields and front yards of some homes, and appears to impact two pioneer cemeteries on the east side of Yonge.

The fenceline approaches the midway point of both the Ebenezer United Church cemetery at 4045 Yonge St. and the Zion Pioneer Cemetery at 5269 Yonge.

Julie Scruton, manager of transportation construction has some reassuring words for residents: the cemeteries will not be impacted by the construction, she says.

“The county's design protects the historic cemeteries,” says Scruton. “The road widening and construction will be accommodated within the existing county right-of-way at these sites.”

She explains that Instead of the open ditching often found beside rural roads, “an urban road cross section has been incorporated into the design in order to minimize the impact to property at the two specified cemeteries… Concrete curb and gutter combined with storm sewer will be constructed  to convey the surface drainage water.”

The project is expected to move ahead this year. Utility relocation will begin in 2021; actual construction of Phase 1, from just north of Bradford to the area south of Coulson’s Hill, is also planned.

“It is anticipated that the construction of Phase 1 will proceed in 2021/2022, followed by Phase 2 and Phase 3 (from Line 13 to 300 metres north of Hwy. 89) in subsequent years, pending County Council budget approval,” Scruton says.

The original Class Municipal Environmental Assessment for the road-widening was carried out in 2012, and has been modified to incorporate plans for the Ministry of Transportation Bradford Bypass corridor, between Lines 9 and 9 BWG.

The county also began its Environmental Assessment for the widening of Yonge from north of 89 to the Barrie City Limits, an EA that is now underway..