Proposed pedestrian crossover will link portions of trail in Cookstown

New crossing 'enhances the pedestrian character of the Cookstown Heritage Conservation District’
May 4, 2021 7:30 AM By: Miriam King 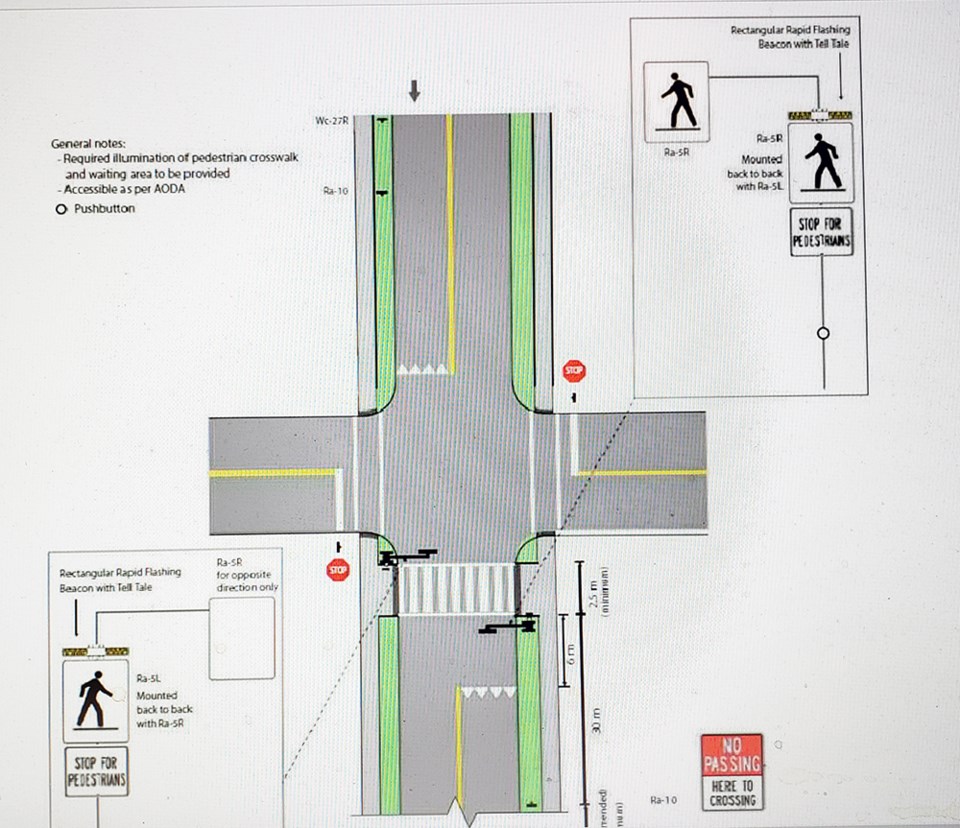 Level 2 Type B pedestrian crossover, as per the Ontario Traffic Manual. Screenshot

The Trans Canada Trail consists of approximately 24,000 kilometres of trails, roads, greenways and waterways, that stretch from the Atlantic to the Pacific, and up to the Arctic ocean – but there are breaks and gaps in the trails.

One of those “breaks” was found in the village of the Cookstown, where the trail crosses Queen Street/Highway 89.

To continue using the multi-use trail, pedestrians and cyclists must either make a 0.8 km detour, to the nearest crossing at 89 and County Road 27 – or risk a dash across the busy route that connects  Alliston, and the Honda Canada plant with Highway 400.

Back in 2016, the Town of Innisfil’s Trails Master Plan recommended the installation of a pedestrian crossover where the trail crosses the highway.

In April of this year, the town was notified that it will be receiving a Connecting Links Program grant in the amount of $59,211, to pay for a portion of the cost of installing a Level 2 Type B Pedestrian Crossover.

The crossover will include pavement markings and regulatory signs, with rectangular rapid-flashing beacons on the ‘Stop for Pedestrians’ signs at either side of the road. The lights are pedestrian-activated.

On Wednesday night, Innisfil Council voted to enter into an agreement with the Ministry of Transportation and pass a supporting bylaw, to receive the grant and be able to move ahead with installation of the crossover.

As the staff report noted, “Currently, pedestrians and bicyclists using the Trans Canada Trail through Cookstown must go 400 metres east of the trail to safely cross former Highway 89.”

The pedestrian crossover not only eliminates the detour and improves access for trail users, but also is a benefit to other pedestrians within the village, and “enhances the pedestrian character of the Cookstown Heritage Conservation District.”

A portion of the trail south of Cookstown, between Lines 14 and 15, is now closed, for the replacement of two pedestrian bridges. The trail was formerly a railway line; the bridges were the old trestle bridges, converted to pedestrian use.

The Town of Innisfil has received a $150,000 Trans Canada Trail grant to carry out the work, which is being undertaken by Serve Construction. Work is slated to begin during the first week in May; the section of trail is expected to remain closed to users until the end of July.