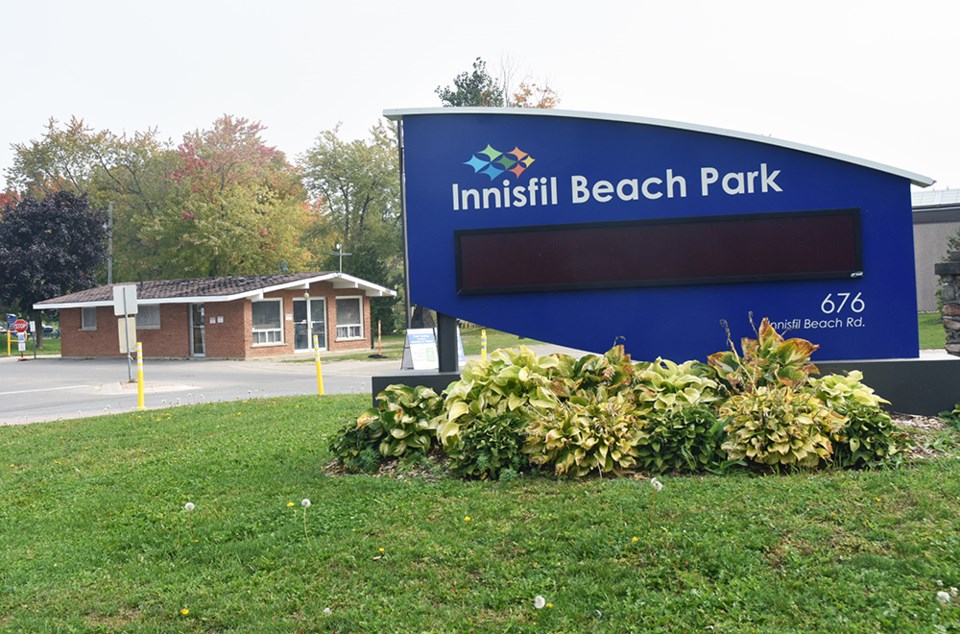 Innisfil Beach Park Master Plan will involve millions of dollars in improvements over the next 20 years. Miriam King for Innisfil Today

Presented near the end of a nearly four hour council meeting, a six page staff report on the Innisfil Beach Park Master Plan Implementation Plan could easily have slipped past the attention of councillors.

The report provided details of the hiring of a consultant this year, to work on the Innisfil Beach Park Master Plan Implementation plan in 2021. The consultant will be asked to look at environmental, cultural and heritage impacts, traffic impacts, geotechnical studies, utility requirements, project costs and project phasing, “with a detailed plan of which projects are to occur in which order.”

But the report also contained plans by staff to immediately implement two of the projects in the master plan, using pre-approved funding, in advance of the implementation plan. The report stated that staff would be moving forward with a BMX pump track, at an estimated cost of $292,000, and outdoor fitness at a cost of $233,000 – looking at procurement this fall, to move forward in spring.

Staff justified the expenditures with the statement, “There is also a lot of anticipation from the community to see some park improvement projects started in Innisfil Beach Park sooner than 2022.”

Coun. Donna Orsatti asked that the document be pulled from the agenda and referred to budget discussions.

“The content of the report is inconsistent with the motion” that was passed by Innisfil Council on June 24, she noted. That was when councillors adopted the Innisfil Beach Park Master Plan vision, and agreed to “amalgamate a bunch of projects that totalled $2.58 million,” and roll the money into the master plan.

Projects that had already been approved by council included automated parking gates, solar lighting, outdoor fitness, and a docking system, said Orsatti – not the items identified in Wednesday night’s report, which included the BMX pump track, and removal of a concrete pier.

“Our CAO Mr. Reynar assured council that each one of those items for the amenities for the Innisfil Beach Park Master Plan would be back at budget time, and we would be able to discuss this,” she said.

Called on for an explanation, Capital Engineering Leader Jessica Jenkins said, “Our intent tonight was to inform council that we were planning to move ahead with the BMX track. That being said, I think we could look at a couple of options if council wants a more thorough discussion on this.”

But Coun. Orsatti challenged the principle of moving ahead with projects without input from either council or the implementation plan.

“My understanding was, with the Innisfil Beach Park vision, each item would be coming to council at budget time. Council would look at the amenities,” she said.

Capital Project Manager Meredith Goodwin, who prepared the report, said that the BMX pump track and outdoor fitness were chosen because “they don’t involve as much investigation work. Kind of low-lying fruit, so we could actually get going on that right away.”

“When I read the report in the agenda I went back and watched the YouTube session of June 24,” Eisses said. Although council approved the master plan, “it was a vision, and we were assured at that point we’d have an opportunity to talk about how that vision would be brought forward. Now all of a sudden, things are being prioritized in a way that I’m having trouble following.”

He added, “If we put things in that are just easy to put in… I just think there needs to be a lot more information brought forward to our residents. The vision has been approved, not how this is being brought forward.”

Councillors voted 6 to 2 in favour of referring the report.

Chief Administrative Officer Jason Reynar acknowledged, “I think there’s a missing step here, and we apologize for that,” but said that with 2020 rapidly passing, “our engineering team was just very excited to try to get this project moving forward. We appreciate that there’s more detail required.”

Rather than ask for a new staff report, council decided to leave discussion until budget time.

“We’ll go through each item as much as you want, but not the motion that was passed in June (approving the park vision),” said Mayor Lynn Dollin.

“This is not about trying to rip apart a master plan that the majority of council voted on,” replied Orsatti, “but all of council understood that we would look at all the amenities that were recommended. It wasn’t sanctioned that all 43 of them were approved. Maybe the vision is, but not all the items.”

The Innisfil Beach Park Master Plan includes a total of 43 possible projects, phased in over the next 20 years, in four key areas:

. Neighbourhood Area could include a community garden, outdoor BMX Pump Track, skateboard park, shaded seating, low-rise institutional-mixed use building with an enclosed community space at the corner of 25 Sideroad and Innisfil Beach Road, and streetscaping.

. The Gateway Area includes a plaza, trees, water feature, picnic space, and rolling hills for views in summer and tobogganing in winter.

The development of an implementation plan, to look at the phasing of projects and how they will fit together, is budgeted at $151,000, which includes $120,000 for consulting and $31,000 in staff time.

Four new COVID-19 cases in schools reported over the weekend
Oct 26, 2020 9:39 AM
Comments
We welcome your feedback and encourage you to share your thoughts. We ask that you be respectful of others and their points of view, refrain from personal attacks and stay on topic. To learn about our commenting policies and how we moderate, please read our Community Guidelines.