LAS VEGAS — The Montreal Canadiens left something behind Tuesday in Las Vegas that you don't often see in the city they call the Entertainment Capital of the World: a disappointed audience.
Jun 23, 2021 1:13 AM By: Canadian Press 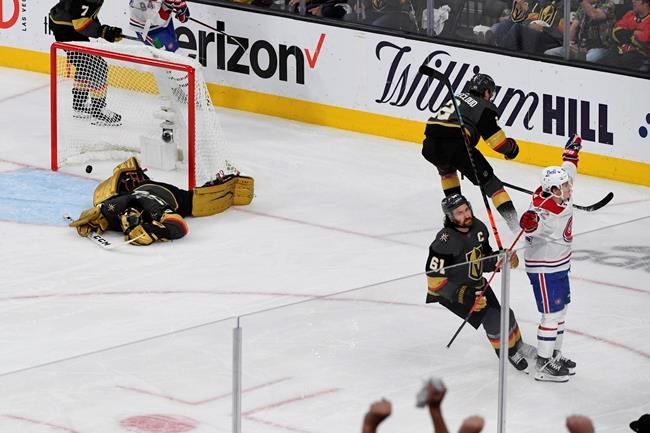 LAS VEGAS — The Montreal Canadiens left something behind Tuesday in Las Vegas that you don't often see in the city they call the Entertainment Capital of the World: a disappointed audience.

With their Stanley Cup semifinal series with the Golden Knights knotted at 2, netminder Carey Price and the feisty Habs harassed and frustrated their Vegas rivals — to say nothing of the 17,969 fans in attendance — to a convincing 4-1 win, as well as a 3-2 series lead.

One more win — Thursday in Montreal or Saturday in Vegas, if necessary — would secure their first trip to a final since their last Stanley Cup win in 1993.

Carey Price was instrumental, stopping 26-of-27 shots. The lone marker came at the hands of former Habs winger Max Pacioretty early in the third period, silencing talk of a shutout but only providing a temporary lift to the Knights.

Brayden McNabb summed it up nicely for the Knights: "We didn't play good at all today. We played right into their game."

Indeed, Montreal looked in control from the opening minutes, scoring midway through the first when Jesper Kotkaniemi buried a wonky rebound from Josh Anderson's drive on Marc-Andre Fleury.

Eric Staal and Cole Caufield each widened the margin in the second, the latter coming on one of Montreal's two power-play chances.

After Fleury was done stopping 23 of the night's 26 shots, Nick Suzuki, a former Golden Knight who traded teams with Max Pacioretty in 2018, added an empty-netter for insurance in the final seconds.

It all made for a three-point night for Suzuki against his former team. His new one can't want to see more.

"Like a lot of the guys on our team, the compete level is really, really high, obviously the skill set is there and the intelligence is there — but you need to have that extra compete, and that level of competitiveness," Staal said of his wingman.

"That's the No. 1 thing I love about him, and all these guys, is our compete, and our willingness to do whatever it takes."

The Canadiens were 1 for 2 with the man advantage, while the Knights went 0 for 1.

Staal made it 2-0 at the eight-minute mark of the second, beating Fleury cold from the point after a perfect feed from linemate Suzuki.

A Vegas clearing misfire on Montreal's first power play of the night helped Corey Perry feed Caufield for his third goal of the playoffs.

Fleury got a hero's welcome to the ice Tuesday after his Game 3 giveaway gaffe cost him the starting slot in favour of backup netminder Robin Lehner for Game 4.

But the Canadiens quickly sapped the energy from a normally raucous T-Mobile Arena, a sequined-tuxedo, celebrity-studded locale just steps from the Las Vegas Strip that knows a thing or two about getting the most out of a crowd.

In Game 2, the Canadiens successfully neutralized the crowd, denying the Golden Knights what is a substantial home-ice advantage: the Habs only play in front of 3,500 fans at home, while the Vegas crowd is nearly 18,000.

On Tuesday, they did it again.

"We're back on top of the other team in all three zones, and it's difficult to play against — and frustrating," assistant coach Luke Richardson said after the team's pre-game skate Tuesday.

Where the Habs stand in the series is secondary to how they approach each game, Richardson said.

"That's going to continue whether we're in the lead, whether we're behind, tied, in overtime, start of game —  that's what we want, to keep that same mindset."

Note to readers: This is a corrected story. An incorrect capacity crowd figure for Montreal Canadiens home games was listed in a previous version.