KISSIMMEE, Fla. — Montreal Impact coach Thierry Henry made a powerful statement at the start of the match. His team could not match that emotion as the game wore in.
Jul 9, 2020 11:11 PM By: Canadian Press 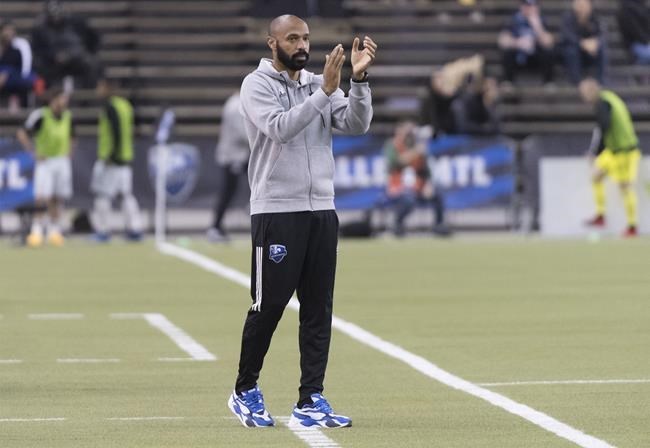 KISSIMMEE, Fla. — Montreal Impact coach Thierry Henry made a powerful statement at the start of the match. His team could not match that emotion as the game wore in.

After players and officials took a knee Thursday before kickoff against the New England Revolution at the MLS is Back Tournament, Henry remained kneeling on the sideline for the first eight minutes 46 seconds of the game — marking the time a Minneapolis police officer had his knee on George Floyd's neck.

"I guess you guys know why," the former French international said after the match. "It was just to pay tribute and show support to the (Black Lives Matter) cause."

New England had the better of the first half and a 56th-minute goal by Argentine forward Gustavo Bou was enough to give the Revolution a 1-0 win over a disjointed Impact side.

Henry said after the match he wanted more fighting spirit from his players.

"If you don't fight, then you don't win battles and you lose balls," he said. "There is no need even to talk about tactics because it had nothing to do with tactics today. It was about desire, that we didn't have. That can happen. I'm not questioning the desire of my players. But tonight it wasn't there."

"They wanted it more than us," he said. "We made too many mistakes under no pressure, individually and as a team, to win this game.

"Hopefully we'll come back. This is something that we want to have and we did have before the break. So hopefully it will come back as soon as possible."

The loss piles on the pressure for Montreal for its next game against Toronto next Wednesday.

Both teams looked rusty, hardly surprising given the league's four-month hiatus caused by COVID-19. New England had the better of a scoreless first half that saw the Impact fail to test goalkeeper Matt Turner.

Montreal rallied to open the second half and the Revolution needed a fine save from Turner to deny Max Urruti in the 50th minute after Samuel Piette put him in alone for Montreal's first shot on target.

But the Impact surge didn't last.

The stalemate ended when Bou rounded 38-year-old defender Rod Fanni at the edge of the box and hammered a left-footed shot high over an outstretched Clement Diop.

New England had chances to extend the lead but couldn't finish them.

Montreal pressed in the dying minutes but New England, with bodies behind the ball, held firm. Turner had to make a fine one-handed save in the 96th minute off substitute Ballou Tabla to preserve the tie.

The Impact became the first Canadian pro team to resume play in the pandemic, with Toronto FC set to return to action Sunday against D.C. United and the Vancouver Whitecaps kicking off their tournament next Wednesday against San Jose.

Thursday night marked Montreal's first outing since March 10 when it lost 2-1 to CD Olimpia in the first leg of the CONCACAF Champions League quarterfinals at Olympic Stadium.

The group games at the tournament count in the regular-season standings with Thursday's result leaving both Montreal and New England at 1-1-1.

Henry recorded his first-ever MLS victory when the Impact met the Revolution on Feb. 29 — just two days short of 19 weeks ago — in their season opener. Montreal rallied from a goal down to win 2-1 thanks to strikes by Romell Quioto (37th minute) and Urruti (80th).

The hiatus allowed both clubs captains to return from injury.

Montreal's veteran Finnish defender Jukka Raitala was back from a fractured right fibula sustained in CONCACAF Champions League play ahead prior to the season opener. Defender Rudy Camacho also returned from a knee injury.

New England playmaker Carles Gil was back after missing the first two games of the season with a foot injury. The Spaniard was named MLS Newcomer of the Year in 2019 when he led his team with goals (10) and assists (14).

Victor Wanyama, signed nine days before the league shut down in March, made his MLS debut for Montreal. The former Spurs, Southampton and Celtic midfielder showed his physicality in the fifth minute, bowling Gil over from behind.