Innisfil resident Michael Oerbach has been banned from unannounced visits to town hall and prohibited from visiting a town-owned lake after he allegedly threatened town staff when trying to do maintenance work on a lake point access near his home
Oct 22, 2020 11:30 AM By: Shane MacDonald 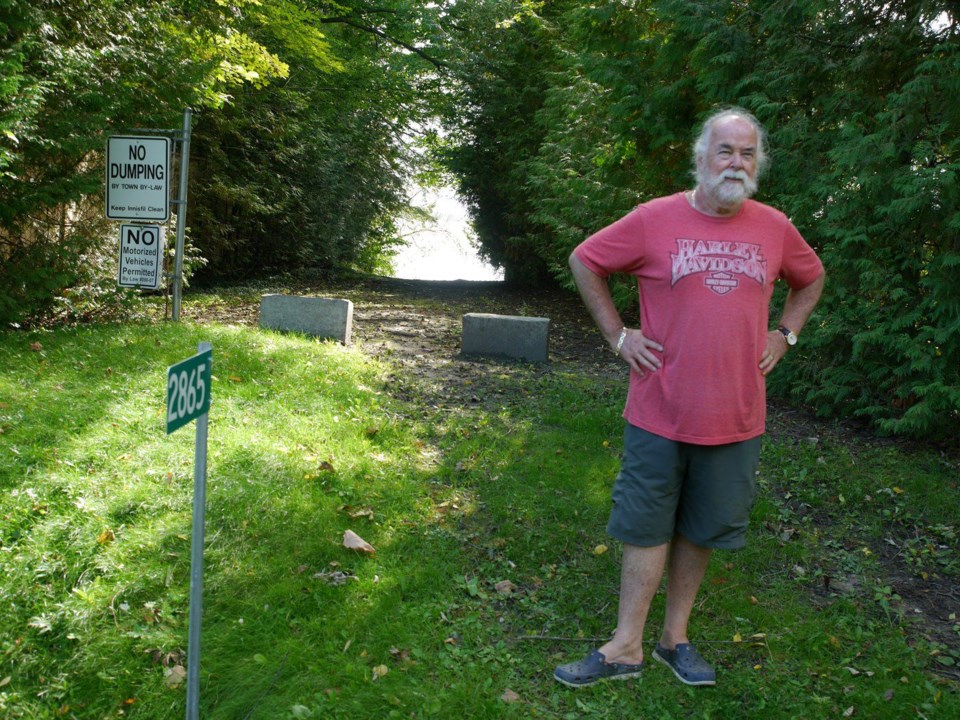 Innisfil resident Dr. Michael Oerbach was restricted from visiting town hall for a period of two months after the Town of Innisfil deemed he violated its respectful interactions policy. Oerbach had been communicating with the town about a right-of-way next to his home. Shane MacDonald, Local Journalism Initiative Reporter

The Town of Innisfil has used its respectful interactions policy to restrict a resident from visiting town hall unannounced for a period of  two months, and issued a notice of a trespass to prohibit him from visiting a town-owned lake access point adjacent to the resident’s home.

The town alleges Oerbach threatened town staff in an aggressive and  intimidating manner when they attended the lake access point located at  2865 Purvis St. to perform maintenance. Oerbach denies the allegations.

“It's all hearsay,” Oerbach said, noting he has appealed the town’s decision.

While things seem to have come to a boiling point, the right-of-way dispute has a long history.

Oerbach has been in communication with the town about the  right-of-way beside his house since at least 2017, when a chain-link  fence was removed. Oerbach said the fence’s removal has led to illegal dumping on the right-of-way.

“I had to put a fence up immediately because I valued the privacy I used to have,” he said.

According to Oerbach, the chain-link fence stood in the right-of-way since 1998, after the town allowed homeowners with deeded access,  Oerbach included, to install it at their expense. The fence was locked,  and only the town and deeded homeowners had access.

According to the Town of Innisfil, a deed of transfer shows that the town purchased the right-of-way for $10,000 in 1998.

“There was a fence in place for quite some time, but unfortunately it  was repeatedly vandalized and tampered with, so there comes a point  when we have an obligation to change direction and try to find a  solution that is more efficient,” Johnny Keogh, communications lead for  the town of Innisfil, said.

The town installed a surveillance camera across the street from the right-of-way to "deter mischief, protect public safety and to better enforce town bylaws."

Oerbach said he has been documenting the situation and claims town staff have visited the right-of-way at least 60 times since the fence  came down.

“They are ridiculous in terms of expending our money on frivolous stupidity,” he said. “The bottom line is you can just put the chain link up with gates then walk away (and) never come back again.”

“We aren’t confident that a gate and fence would serve as the right  visual cue to the community, as typically this signals that an area is  restricted, is private property, or inaccessible, which does not align  with the master plan that was assembled with input from residents from  across Innisfil,” Keogh said.

Oerbach said the right-of-way saga shows the town has lost touch with its residents in favour of “generic algorithms.”

“One size does not fit all,” he said. “It's the principle, it’s consideration for the neighbourhood.”

According to the Town of Innisfil, Oerbach is the second resident to have restrictions imposed on him under the respectful interactions policy, since it was passed by council in 2019.

“Town staff makes every effort to work with residents to come to a  resolution first, as this is always our preferred outcome,” Keogh said.  “The decision about whether to implement any restriction goes through a  vigorous approval process and is only implemented as a last resort when  all other efforts have been exhausted.”

Keogh said the town has a responsibility to residents and town staff  to ensure that any behaviour considered as offensive, threatening,  embarrassing or bullying is not tolerated.

Applications for Simcoe County District School Board’s French Immersion program open next week
Nov 26, 2020 4:45 PM
Comments
We welcome your feedback and encourage you to share your thoughts. We ask that you be respectful of others and their points of view, refrain from personal attacks and stay on topic. To learn about our commenting policies and how we moderate, please read our Community Guidelines.